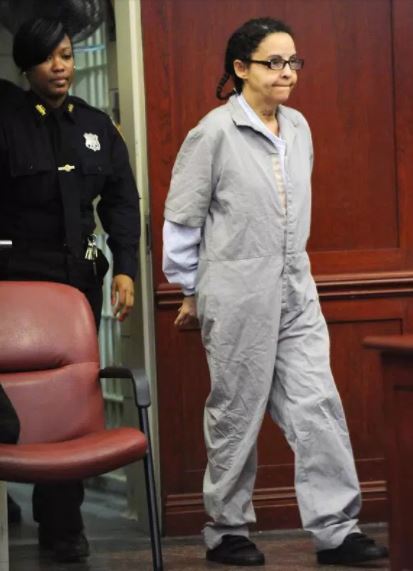 A nanny identified as Yoselyn
Ortega had butchered two innocent kids in New York. More details as you read
more…
Some really horrific photos have
been released which show a nanny lying in a pool of blood after butchering two
young kids then cutting her own throat.
Yoselyn Ortega is on trial over
the murder of brother and sister Leo (two years), and Lucia Krim (six years),
in their New York apartment in October 2012.
Jurors heard how the nanny
stabbed herself in the neck just as the children’s mother arrived at the murder
scene but survived her horror injuries.
Prosecutors say Ortega waited
until Marina Krim found her children dead before plunging the knife into
herself so she could relish her agony.
Ortega was found lying slumped
in the doorway of the bathroom, covered from the waist up in blood and next to
a huge kitchen knife.
She appeared to be unconscious
and seemingly had something tied round her blood-soaked neck.
The 55-year-old was rushed to
casualty and photos of her in a hospital bed show her on a respirator and drip.
A particularly gory photo
showed a close up of her neck where a chunk of skin appeared to be missing.
One juror covered her face when
confronted with the image of the gaping, self-inflicted stab wound. Another
closed his eyes and shuddered.
The court was shown a series of
images, including “hesitation” cut marks on her wrists, which Dr Jonathan Arden
called “very, very superficial”.
The expert testified Ortega
drew the blade across her right wrist once and her left wrist three times
before deciding to slit her own throat.
The force with which Ortega
stabbed herself twice in the neck was so great she broke her neck in the
process, Arden testified.
Ortega, who is mounting an
insanity defence, claims she’d been “touched by the devil” and doesn’t recall
the murders.
Horrified jurors were earlier
shown sickening crime scene pictures in court and some were then released to
the media by the city’s District Attorney.
Photos of a bloodied knife
wrapped in a towel in the hallway and blood spattered on the floor and walls
were among the images shown.
Blood was smeared on the walls
and floor of the bathroom where the bodies of Leo and Lucia – known as Lulu –
were found with their eyes open.
The bottom of the tub was
almost entirely red, according to the Daily Mail.
One blood-covered knife sat in
a  sink next to a pink child’s toothbrush.
Another knife sat wrapped in a
towel on op a toy refrigerator in the apartment’s hallway.
At least two jurors wiped away
tears as they beheld the horror images, as others gasped and held their faces.
By the afternoon, one juror
told the judge he could no longer be fair and impartial and was excused from
the case, it was reported.
The photos were taken about
seven hours after mother Marina Krim found her kids mortally wounded.
She also saw Ortega stabbing
herself in the neck in an apparent attempt to take her own life.
Leo was stabbed five times, and
Lucia, who fought back, was stabbed 30 times, according to prosecutors.
Ortega is said to have
butchered the children while their mother was blocks away at a dance studio.
Ortega was supposed to pick up
Lulu from kindergarten and walk her to dance class before going home to put Leo
down for nap.
Marina had shown up to the
dance studio to pick up LuLu and panicked when she noticed her daughter wasn’t
there.
She frantically texted Ortega:
“Where’s Lulu… Donde Estas… Where are you” but Ortega did not
answer.
A therapist who saw Ortega days
before the stabbing occurred testified she hadn’t appeared suicidal or
murderous.
Dr Thomas Caffrey said they met
to discuss a variety of different issues including anxiety, depression, and
guilt.
Ortega has claimed she heard
voices and was “touched by the devil” which drove her to carry out
the murderous attack.
But Caffrey told the court
there was “no evidence” she suffered from any delusions or
hallucinations.
In her first statement to
police following the murders, Ortega allegedly complained about the children’s
mother, reports the New York Post.
“I had to do everything
and take care of the kids,” she said on waking up in hospital two
days after the attack.
“I worked as babysitter
only and she (Krim) wanted me to do everything so wanted 5 hours of cleaning
every week.
“When I got things wrong
she would make a grunting, gargling sound. She would show frustration.”
Earlier emergency workers who
were called to the horrific scene gave evidence to the court.
“That’s the worst crime
scene I’ve ever seen, other than September 11,” said paramedic Eugene
Nicholas.
Building caretaker Michael
Minihan offered a chilling account of Ortega’s eyes bulging out as she gasped
for air and bled from the knife wound.
He remembered rushing to the
apartment in October 2012 after hearing mom Marina Krim’s blood-curdling cries.
Krim was on the mezzanine “holding
her middle child, Nessie, screaming incoherently,” Minihan said.
When Minihan entered the
apartment, he said he first saw Ortega, “staring … the eyes of the
devil in my face,” he said. “Her eyes were bulging.”
Ortega faces a minimum of 20
years imprisonment if she is convicted and could be jailed for life without
parole. 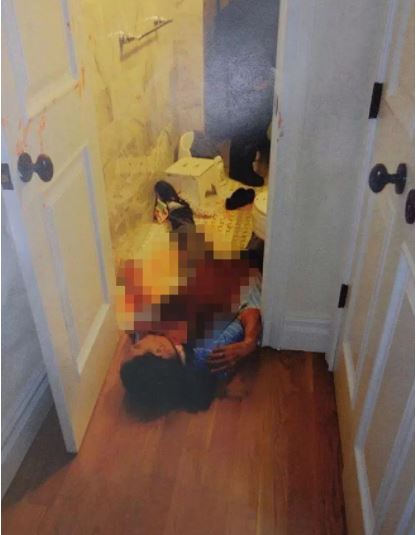 Above is the graphic
photo of Ortega as she was found lying slumped in a doorway covered from the
waist up in blood.
Source: The
Sun UK
Facebook Comments