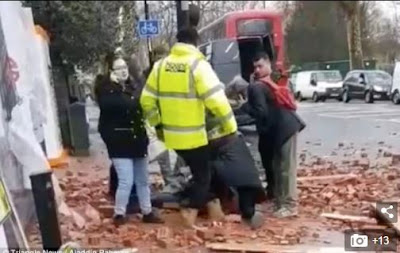 A
woman is now fighting for life after being crushed by a pallet of bricks that
appeared to be falling from the sky. See details…

The photo above is the scene of the incident

The bricks fell 70 feet from a
crane as she walked past a building site. She is a young mother who had just dropped
her child off at school, MailOnline has learned.
Passers-by rushed to help the
29-year-old woman from East London as she lay unconscious on the pavement
yesterday morning among bricks and broken wood. 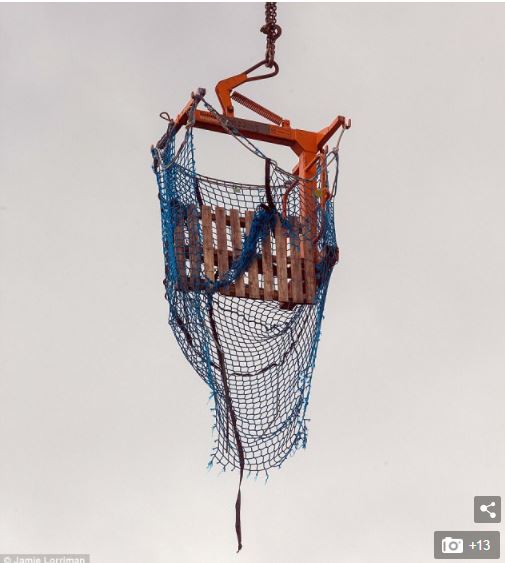 In the above photo is a basket on the crane from which the pallet of
bricks is believed to have fallen.
The woman is understood to have
dropped off her young son at St Paul’s and St Luke’s Church of England Primary
School, which is across the road from the building site in Mile End.
She is still in a critical
condition in hospital while work at the development appears to have been paused
with a Health and Safety Executive investigation ongoing.
A friend of the woman told The
Evening Standard:
“Her family are devastated, we all are. She has ended up
fighting for life in hospital on her 29th birthday.

We had seen pallets of bricks
wobbling up there, it was just not safe. It could have been any of us. The
family and all of us want answers.”
Mother Bernadette Hegarty,
vicar of St Paul’s of Bow Common Church, which is attached to the school,
rushed to the scene minutes after the accident at about 9.30am.
The vicar told how paramedics
brought the young woman back to life after suffering multiple injuries.
Mother Bernadette told
MailOnline:
“The young woman looked very wounded. The paramedics brought
her back.

She is now critical in
hospital. I did not see the accident but I went over to comfort her after I
heard what had happened.”
The young mother is believed to
have been on her way to a local supermarket when the pallet of bricks fell upon
her.
Prayers will be offered for the
young woman at a Maundy Thursday Service and at Good Friday Service at Bow
Common Church.
Mother Bernadette told
MailOnline:
“She is a well-liked member of the community. I know her to
say hello to. We are all in deep shock by what has happened, as are the workers
on the building site.

Our thoughts and prayers are
with the young woman and her family at this difficult time.”

Another parent from St Luke’s
Church of England Primary School described the young woman as a ‘lovely girl’.
She added:

“We are all devastated by what happened”.
Source: Daily
Mail UK
Facebook Comments

About @TrendsOfLegndsTeam 13432 Articles
We inspire people with whatever we are destined to do in life. We're on twitter: @MusicParrot1 & on Facebook: @TrendsoflegendsBlog