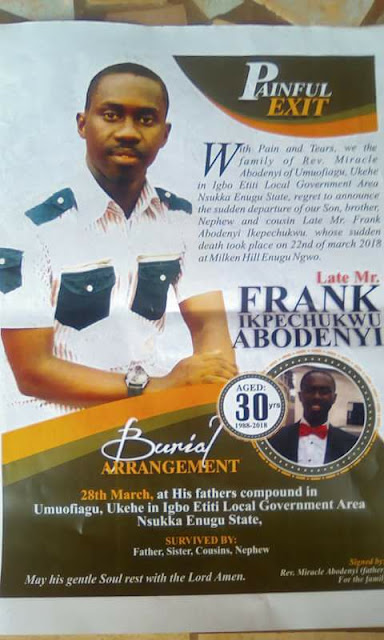 A 30-year-old Graduate involving in an accident in Enugu that allegedly caused by NCDSC lost his life. See details as you read more…

Below is the full story of his
death
Family members and friends of a
University Graduate, Paul Ikpechukwu, have lamented over his death after he
lost his life in an accident allegedly caused by officers of the Nigerian Civil
Defense and Security Corps (NCDSC) Enugu Headquarters.
It was gathered in reports that
the security officials chased a commercial bus with passengers on board from
New Market Area as the bus driver drove up hill to Ngwo (Milliken Hill) for an
alleged violation of traffic rules.
The members of NCDSC opened
live ammunition (shootings) targeting the bus in motion with passengers in the
bus during morning periods of Thursday 22nd March, 2018.
Unfortunately the bus entered
the valley in Milliken hill caught fire and burnt Mr Ikpechukwu, a young
peaceful Graduate to death.
Report has it that the deceased
was set to be buried on Wednesday, 28th of March, 2018, at his hometown in
Nsukka Area of Enugu state.
A friend, Francis Ifesi Nwodo while mourning him on Facebook wrote:

“If
I fail to say good bye at noon to you there means that my conscience has failed
me, we have been friends during those days growing up, we worked closely last 9
years ago during the funeral of my Ogbo Pa Francis Okoloagu were you were busy
working with us at your own ogbo’s house his son Gen Joj Okoloagu in 2009, and
that was the last time I saw you.

I
love your determination as an Ukehe youth, during your stay at ESUT I heard you
did well that prompted your going abroad to do your M.Sc.

You
were killed carelessly by men of NSCDC Enugu unit that fired at a bus in which
you were inside as a passenger for breaking road traffic laws, the bus fell
inside a big dish of Milkin hill near New Market Enugu and you died.

We
are working on bringing justice to you to caution these heartless armed men
wearing security clothes, as you will be laid today at your Umuofiagu village I
pray for your soul to rest in peace. Adieu Ikpechukwu Frank Abodeny”. 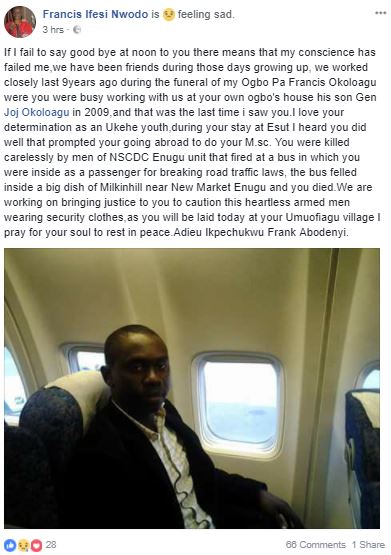 What a sad story; may his
soul rest in peace, Amen.