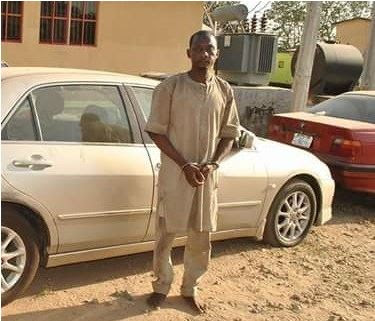 A young man who robbed his landlord, killed, and buried him in a shallow grave has been nabbed by security operative. Get more details as you read more…
His name is Ma’aruf Sarki, a young man from Sokoto State, who was nabbed for killing his landlord, Alhaji Tasiu Shittu.
According to report, the man was nabbed after he was trailed by the operatives of the Niger State Police Command in a painstaking investigation on the whereabouts of Alhaji Tasiu Shittu of Kontagora, who left home since on 25th February, 2018 and never returned.
The 34-year-old suspect confessed to have robbed the deceased of the sum of N1,700,000 and his unregistered Honda Accord Car valued at N1.5m.
He then murdered him in cold blood and buried the corpse in a shallow grave in his rented apartment in Kontagora Local Government Area.
Sarki claimed that he was hired to kill his landlord at the sum of N2m.
The suspect said,
“I used local medicine to kill the man and buried him inside the house that I rented from him. I was hired to kill him by one of his business associates. I regret my action.”
The corpse was exhumed for autopsy. Exhibits recovered includes a Honda accord car and N1.7m of the deceased frozen in the account of the suspect. The accomplice is said to be on the run.
Facebook Comments