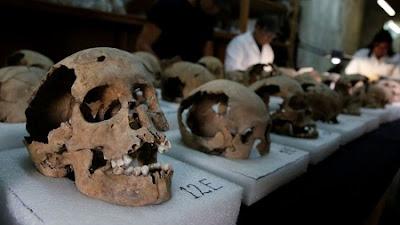 A young man identified as Suleiman Ajenifuja has been nabbed by men of the Nigerian Police in Kwara State in possession of three human skulls he wanted to use for money rituals…
According to report, a 32-year-old Lagos-based street cleaner has been arrested with three human skulls which he claimed are meant for rituals to turn his fortunes around.
He was caught by the Kwara State police command while in possession of the human skulls.
Speaking while parading Suleiman Ajenifuja (the suspect), the commissioner of Police, Ado Lawan, said that the suspect was arrested during a stop-and-search operation on a commercial vehicle coming from Lagos state.
Lawan revealed that Ajenifuja was nabbed on Monday, March 26, 2018, when police searched a bus conveying seven passengers from Lagos to Ilorin, added that the skulls were wrapped in a sack and that the suspect had confessed to the crime.
In his interaction with journalists, the suspect, a father of two, said that he found the skulls while working as a cleaner in Lagos, adding that, though he trained and usually works as a tailor, he had combined the job with the work of a street sweeper, from 11.00pm till 2.00am every day.
“I work with LAWMA, I am a tailor but I work as a street sweeper from 11 pm to 2 am. I have my uniform there.

It was while working one night that I saw the bag containing these things. I initially wanted to drop them but someone told me it could be used for some things.

That was how I contacted one of the boys, Saheed that we usually talk together and it was this man that gave me a phone number to call.

The man on the other side of the line, who is an Alfa, told me to come to Ilorin. I have never been in Ilorin before but he told me to drop in General that he would come and pick me there.

He had earlier asked me what I wanted to do with the things and I told him I would want what would be bringing more people to my shop. That is all.”