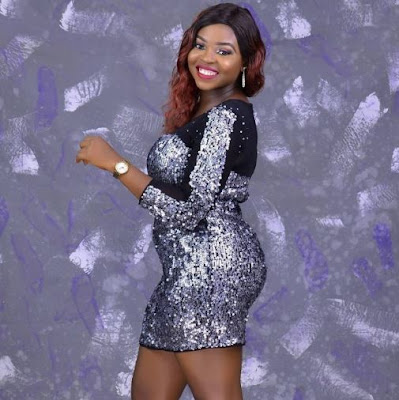 Busty Yoruba Actress, Opeyemi Adetunji revealed that she cannot allow her boobs to be touched in a movie. Hmmmmmm! Who asked her? See details…

An intimidating figure, a litany of movie appearances and commendations, when you throw in a unique acting aptitude, what you get is Opeyemi Adetunji.

Acting has always been Opeyemi’s first love. The actress who has featured in movies like Mopelola, Omo Alhaja 2, Omo Ijoba, to mention just a few, told TheNewsGuru that she has always wanted to be an actress.

I was kind scared and timid when I went for my first audition. I was accompanied by a friend who really encouraged me.”

Opeyemi isn’t one to undermine the challenges she encounter on her voyage to the top. Being visible and getting roles has been her challenges so far.

“Being visible and getting roles has been a challenge. I know that it’s only a matter of time. The pay is fair for now. When you are passionate about a craft, you won’t think about the money as long as you are happy doing it.”

“Sexual harassment is my limit. If it gets out of hand and I can’t control it. I will gladly quit. It is not a do or die affair.”

The journey to success is often filled with thorns and detours, with many throwing in the towel just before the taste of success. Opeyemi has experienced her own fair share of such thorns.

“I have put my life at risk so many times because I had to be on a movie set. Most times I travel late at night”, she recounted.

The busty actress insisted that she has a limit when it comes to playing romantic scenes, adding that she can only be kissed but will not allow her boobs to be touched in a movie.

“I can act a romantic role, but I cannot go nude on set. I cannot allow my boobs to be touched in a movie . Kissing is my limit when it comes to playing such roles.”

About @TrendsOfLegndsTeam 13393 Articles
We inspire people with whatever we are destined to do in life. We're on twitter: @MusicParrot1 & on Facebook: @TrendsoflegendsBlog