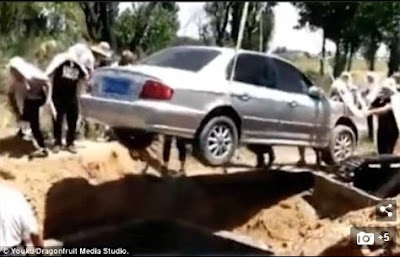 You know, Lucky Dube was right
by singing about crazy world. Just imagine, a man who was really in love with
cars was buried inside a vehicle by his fellow villagers after his death. See
more photos.
As reported by Daily Mail UK, a
car lover in Northern China was granted his final wish when he was buried in a
saloon car after his death.
The man, identified by his
surname Qi, died in his village in Baoding city in Hebei province on
Monday.
He specified in his will that
he wants to be laid to rest in a car instead of a traditional coffin, according
to Kan Kan News.
His family was able to locate
an old Hyundai Sonata and bought it for 10,000 yuan (£1,173).
Families in big cities such as
Shanghai, Beijing and Guangzhou averagely spend around 80,000 yuan (£9,391) on
a funeral, according to Shanghai Daily.
The funeral for the car lover
was then carried out on Tuesday.
Video footage of the bizarre
service shows the silver saloon bearing the body of the man being slowly
lowered into the grave by an excavator.
The grave was specifically dug
to fit the saloon and was seen held in place securely with cement plates on the
sides.
Mourners were seen paying their
respects at the service and standing around to guide the car into its large
grave. The car still had its license plate attached.
After the car-coffin was placed
carefully into the grave, the excavator filled the hole with soil.
While the service appears
relatively bizarre on the surface, an increasing amount of Chinese people are
being presented in coffins that represent their social status.
Many believe that owning things
like a car and a house while on earth is a matter of dignity and the same is
true for when they die.
Being buried in a car implies
what this man achieved while he was alive.
Check out more photos from the funeral below: 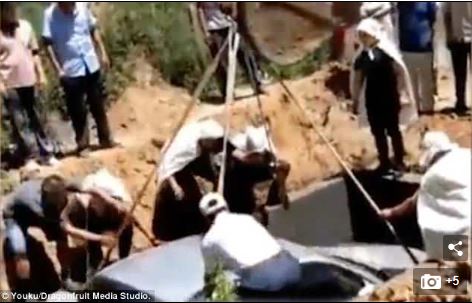 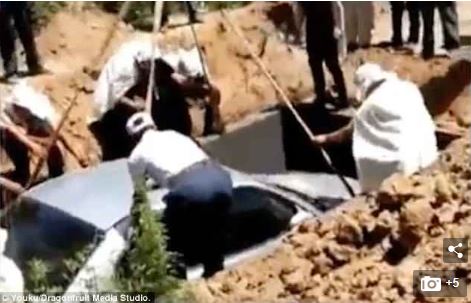 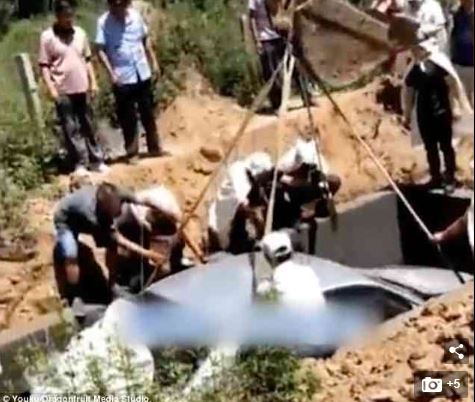