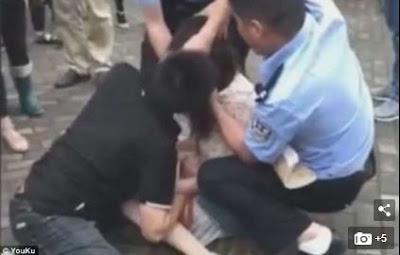 It is really funny how a woman was reported to have bitten her boyfriends tongue and refused to let go during a break-up kiss. Break-up kiss! O di egwu!

As reported by IB Times, a
23-year-old man in Eastern China had to be rescued by Police after his
soon-to-be ex-girlfriend apparently bit his tongue and refused to let go.
According to some onlookers,
the bizarre incident happened when the man had proposed to break up with the
26-year-old woman, and she asked for a last kiss.
Officers in Anhui Province had
to use pepper spray on the woman to free the man, according to Police.
The woman’s parents explained
to Police that their daughter recently became ‘mentally unstable’ after being
scammed while shopping online, and that could be the cause of her behaviour.
The parents said their daughter
and the man had been in a relationship for several years. They didn’t comment
on whether or not they were breaking up.
The incident happened on the
street of Qianshan in Anhui Province on May 20.
Mobile phone footage has emerged
online, which shows the couple appearing to be kissing outside the town’s
disease control and prevention centre.
The man can be heard crying and
struggling to break free as his girlfriend bites on his tongue.
According to Police, the man,
surnamed Liu, was taken to the hospital. He didn’t sustain major injuries.
His girlfriend, surnamed Zhou,
was taken to her parents’ house to be looked after.
Police officer Wu Changfeng
said:
“When we arrived, some
passers-by said the couple were talking over issues of a breakup.”
Officer Wu added that the
woman’s parents had claimed she had suffered from mental health problems in the
past.
“Her parents said she had
received treatments in Hefei for five years and then she had fully recovered,” policeman
Wu said.
That one na for oyibo man
country nah! E no fit happen for Naija where lovers dey exchange break-up kiss.
Na wetin be that one kwa.
See more photos from the scene below: 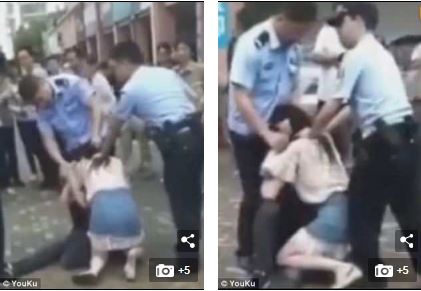