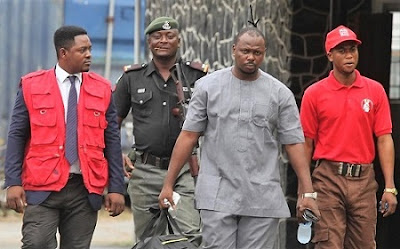 Nsa Ayi who was once banker/Staff with Coronation Merchant Bank has been found guilty by a court for engaging in N700 million fraud. See details as you read more…
Reports have it that Nsa Ayi, a former relationship officer in Coronation Merchant Bank, has been sentenced to seven years imprisonment for diverting clients N700 million.
The sum of money was meant for Federal Government bonds, treasury bills and fixed deposits. He was sentenced today by Justice Mojisola Dada of the Lagos State High Court, Ikeja, Lagos.
The convict, who was arraigned by the Economic and Financial Crimes Commission (EFCC) on February 26 (Wednesday), 2018, on an 11-count charge, was accused of altering instructions and falsifying signatures of customers to transfer money into various accounts outside the bank.