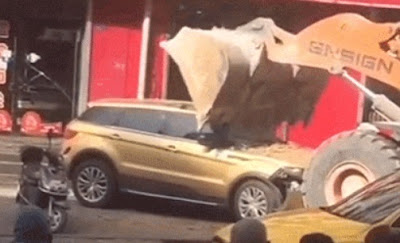 A video making rounds online showed
the shocking moment a multi-million Naira golden Range Rover luxury car was
publicly crushed to pieces.
As reported by MetroUK, a
golden Range Rover was filmed being crushed by a digger after its owner didn’t
repay money he said he would.
Witnesses to the scene filmed
what happened as a crowd gathered in the street watching the destruction. 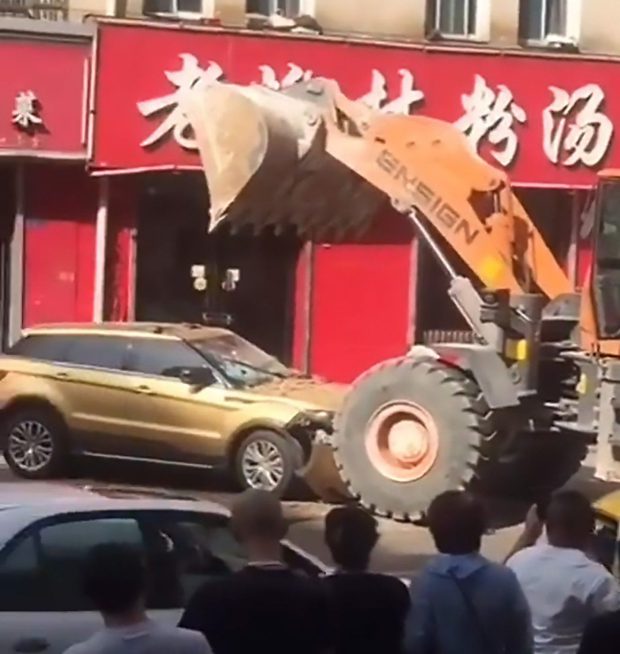 The huge digger crushed the
front of the Range Rover after dropping its scoop on the windscreen, cracking
it. We imagine coming back to see this had happened to your car would be worse
than coming back to find a parking ticket.
Footage taken by witnesses in
Luliang City’s Lishi District in North China’s Shanxi Province shows the whole
episode, which we’d advise any car-lover to avoid watching in case of distress.
The loader driver, who has been
identified by his surname Gao, then parked in front of the vehicle, blocking it
and leaving witnesses stunned.
He was then summoned to the
police station. Gao told the police that the Range Rover owner owed him money,
and he had tried numerous times to ask for his money back to no avail. It is
understood that the owner was not in the car at the time.
Gao has been given 15 days of
administrative detention for vandalism. The authorities have encouraged
citizens to go through ‘proper channels’ to fight for personal rights such as
money owed. It is unclear how much money was owed.
Watch the video below:
Source: MetroUK
Facebook Comments