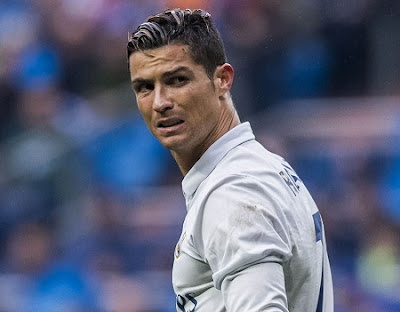 Recent report has revealed that if care is not taken C. Ronaldo might be on his way out of Real Madrid if the club refuses to increase his wage…
Ronaldo might be set to leave Real Madrid following new revelations by Spanish outlet Diario Gol.
A report by Express UK revealed that the paper claims that the Portugal international has threatened to leave if he does not get same amount Barcelona star, Messi, is receiving.
Diario Gol say Ronaldo wants Real to grant him pay parity with Lionel Messi at Barcelona.
Messi is currently the world’s highest-paid player, pocketing a huge £500,000 every week.
And Ronaldo wants Real to give him the same – if he shoots them past Liverpool. Real Madrid will face Liverpool in the Champions League in Kiev on May 26.
Last summer, talk was rife that Ronaldo was determined to turn his back on the club he signed for in 2009.
Inevitably, speculation arose that Manchester United and PSG were prepared to break the bank for him.
However, both deals look highly unlikely now.
PSG are reportedly angry at Real for their public pursuit of Neymar and may block all negotiations with Zinedine Zidane’s team.
United, meanwhile, are understood to be focusing their efforts on midfielders, rather than attackers, having invested big on Romelu Lukaku and Alexis Sanchez over the last year.
What do you think? Do you think there is more possibility of Ronaldo to leave the club if they ended up not increasing his pay? Drop your comments…
Facebook Comments

About @TrendsOfLegndsTeam 13442 Articles
We inspire people with whatever we are destined to do in life. We're on twitter: @MusicParrot1 & on Facebook: @TrendsoflegendsBlog