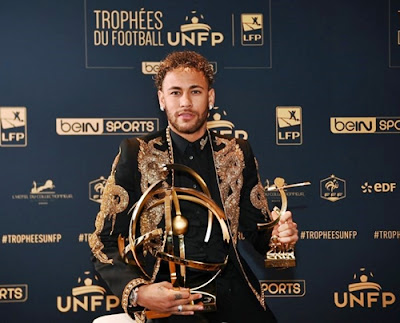 Paris
Saint-Germain forward, Neymar, has revealed how scared he is prior to the 2018 World Cup in Russia…

Paris Saint-Germain forward,
Neymar who is the world’s most expensive player and is battling to be fit for
Brazil’s World Cup campaign in Russia, says he is aware of the pressure, saying
that nobody is as scared as him.
Paris Saint-Germain’s star
player, Neymar Jnr, was on Sunday night crowned player of the year in the
French Ligue-1 for his 19 goals and 13 assists, while his team-mate, Kylian
Mbappé was named young player of the year at the Trophées UNFP.
Neymar received his prize from
another Brazilian great, Ronaldo, a reward for the impact the world’s most
expensive player made in his 20 league appearances before injury curtailed his
season.
Accepting the prize, Neymar
said: “I would like to thank all my team-mates, the whole team. I am
very emotional and I am very happy with our season.”
Meanwhile, Neymar has admitted
he is “scared” as he closes in on a competitive return to
the pitch with the FIFA World Cup in Russia, with Brazil looming large.
The Brazil star returned to
training with PSG last weekend as he continues his recovery from a broken foot
sustained in February, but sat out the recent Coupe de France final win and is
unlikely to feature in Saturday’s final Ligue 1 game of the season in Caen.
Last summer’s world record
signing from Barcelona has not featured for PSG since, but is expected to be
fit for his country’s World Cup warm-up with Croatia on 3 June.
“No-one
is as scared as me,” Neymar told TV Globo as he nears full
fitness. “I know that people are a
little nervous, but nobody is more so than me, no-one is more anxious to make a
comeback than me.”
The former Santos prodigy
inspired his country to Olympic gold on home soil in 2016, but admitted the
World Cup remains the ultimate prize.
“It’s
a very difficult time, I think it’s the most difficult I have had because we
are so close to my dream, the World Cup.
Thanks
to God, I have this new opportunity to become world champion with my country.
It’s a dream I’ve had since I was little, it’s my main objective. I hope it
will be my Cup.” 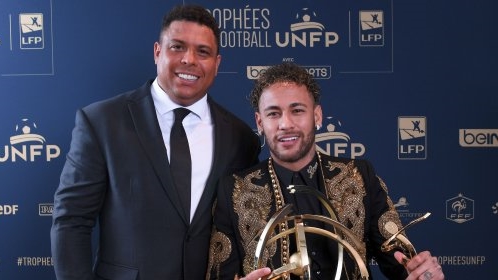 About @TrendsOfLegndsTeam 13482 Articles
We inspire people with whatever we are destined to do in life. We're on twitter: @MusicParrot1 & on Facebook: @TrendsoflegendsBlog