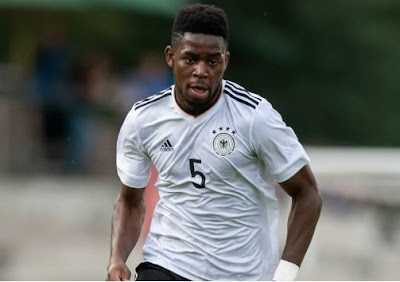 A youngster Jordan Torunarigha has rejected an offer for him to play for Super Eagles of Nigeria in the 2018 FIFA World Cup in Russia…
Gernot Rohr is disappointed following the decision of Jordan Torunarigha to turn down an opportunity to feature for Nigeria at the 2018 World Cup.
The German-born Nigerian has represented Germany youth sides but has yet to make his debut for the senior team which makes him eligible to play for the three-time African champions.
The defender who rose from the youth team of Hertha Berlin has made 14 appearances across all competitions this season for the Bundesliga outfit.
However, the 20-year-old has preferred to pledge his international future to the reigning world champions, much to the displeasure of the German tactician – looking to fortify his defence ahead of the big summer in Russia.
“It’s disappointing because he was presented with a great chance to play in the World Cup if only he was interested”, Rohr told BBC Sport.
“I’ve followed his progress, I believe he would have made positive contributions to the team.

But we must really respect this young boy’s decision now and wish him well.”
As part of the Super Eagles’ preparation for the global tourney, they will slug it out with Atletico Madrid on May 22 before meeting with DR Congo six days later at the Godswill Akpabio International Stadium in Uyo.
They conclude preparations with ties against England and Czech Republic on June 2 and June 6 respectively.
In Russia, they will be aiming to navigate their way past Argentina, Iceland and Croatia in Group D.
Facebook Comments