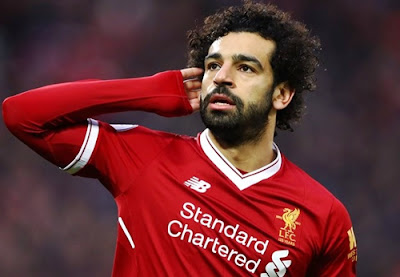 Mohamed Salah, Liverpool star, has opened up on his footballing heroes while growing up in Egypt. More details as you read more…

The Liverpool Football star is enjoying an emphatic debut campaign this season. So, why won’t him be in a happy mood to share his memories. He is a Football Legend, no doubt.

While speaking in an interview with CNN’s Inside the Middle East, Liverpool star, Mohamed Salah, revealed that AS Roma legend, Francesco Totti and Brazilian icon, Ronaldo were his footballing heroes growing up.

When asked about his childhood idols, the 25-year-old who is enjoying an emphatic debut campaign at Anfield, invoking the deadly finishing of his idols to score 43 goals in all competitions, mentioned the two footballing Legends.

According to Dailymail UK, the Egyptian had the chance to play alongside Totti during his brief stint in Rome between 2015 and 2017 and he has hailed the Italian veteran’s quality.

“I say before many times, the Brazilian Ronaldo and Totti. He’s unbelievable, he’s quality. As a person too he’s quality. He’s calm, great, very quiet and the confidence about him. I learnt a lot from him.”

Totti scored 307 goals in a staggering 786 games for the Italian giants during a 25-year playing career.

While Ronaldo, who was one of the most clinical strikers in world football, enjoyed sublime goal scoring records at PSV Eindhoven, Barcelona, Inter Milan and Real Madrid.


Salah has been an instant hit on Merseyside, helping fire Liverpool to the Champions League final with Jurgen Klopp’s side set to face Real Madrid in Kiev later this month.