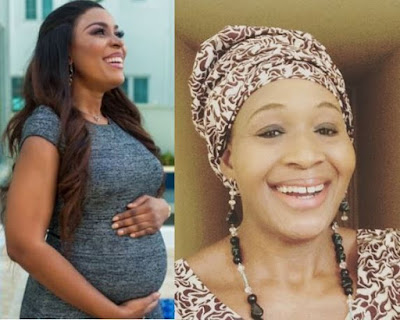 Reports have it that Kemi
Omololu Olunloyo (investigative Journalist and Blogger) has continued to criticize Billionaire Blogger, Linda Ikeji, saying her pregnancy is fake. This is really getting serious…

Do not forget that we are still
talking about legends and their trends…
See the full detail below as
published on tori.ng:
It is reported that Kemi
Olunloyo is still on Linda Ikeji’s case, insisting her pregnancy is fake, and
now she has moved to cursing her and her family.
She has also told her to send
her account details so she can refund the money (N100,000) Linda sent to her
while she was in prison.
According to her, she does not
appreciate the money.
Read below:
“#lindaisnotpregnant
People STOP spreading lies Wale
Gates! I should start listing who donated what. Stupid dumb fool.
A MESSAGE FOR #LINDAIKEJI
@officialLindaikeji I was trying to promote your stupid ass by announcing your
N100k. Idiotic slowpoke. Punch called me telling me that you sent me 100k while
I was “languishing” in prison. When I came out the first time, Dumo
gave me 850k, Miriam and Halima gave me 200k each and the list goes on. People
don’t want me to criticize you because you donated to me. That’s what ruined
Nigeria. You can’t report about certain personalities because they are sacred.
I will continue to expose your lies.
May God paralyze your
livelihood and everything you lay your hands on like they did mine for telling
Punch that wicked statement and may you and your family members languish in
prison some day. The last time I cursed you is when you destroyed Adeola’s
wedding sleeping with Dan two weeks before the wedding, snatched DBanj from
Uche and lied that she was sleeping with Ikechukwu. I told you that you will
never marry or have kids. It is now catching up.
You need to apologize for that
rubbish. Send me your account details to return your ritual money. People are
in my twitter DM telling me you allegedly used your womb for rituals to get
super rich, others saying you allegedly slept around to get money to build your
empire. Regardless you gave me a mere 100K AND I DON’T APPRECIATE IT. TAKE IT
BACK you homewrecker preaching celibacy. MAY YOU BE SERIOUSLY DISGRACED WHEN
YOUR MOONBUMP FALLS OFF LIKE BEYONCE .
Goodnight everyone.
KOO”

This is really gaining more momentum. Let us be watching and see where the whole thing will lead to.

Whether the pregnancy is fake or not, the truth will still be know; time will tell.


I don’t know much about their bone of contention, but it will be awesome if they move this issue out of internet media and settle their differences.