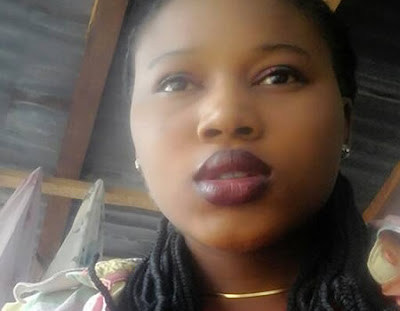 A 25-year-old man has allegedly taken the life of a 19-year-old girl for refusing to date him. More details…

Report has it that a
25-year-old man, Saliu Oladayo has been arrested by men of the Ondo State
police command for allegedly stabbing a woman to death in Akure, Ondo state
capital, after she refused to date him.
According to Nigerian Tribune,
the suspect was said to have stabbed 19-year-old girl, Chinyere Ebere, to death
following an argument between the deceased and the suspect at Obasuyi Street in
Ijoka area of the state capital.
According to a source, the
suspect had been asking the young lady to date him for a long time while the
lady refused to all his overtures and advances.
He, however, said that an
argument ensued between the two, explaining that, the suspect claimed that the
deceased insulted him and allegedly took a knife and stabbed the girl to death.
Speaking on the death of her
daughter, Mrs. Lovelyn Nwama, explained that, her daughter just came back home
after writing her final SSCE examination before she was stabbed to death by the
suspect
The mother said:
“My daughter just came back
home from where she went to write her WAEC yesterday. I observed some changes
in her which led me to beat her before the unfortunate incident.
I was in my shop when some
neighbours alerted the police and I rushed to the scene of the incident only
found my daughter in her pool of blood.”
Confirming the incident, the
State Police Public Relations Officer (PPRO), Femi Joseph, explained that the
suspect was asking the girl to date him which she refused.
According to the PPRO, the
suspect claimed that the deceased embarrassed him publicly which infuriated the
suspect, who stabbed her, leading to her death.
Joseph, however, said the
suspect has been arrested and the police would soon charge him to court after
investigation.
Facebook Comments