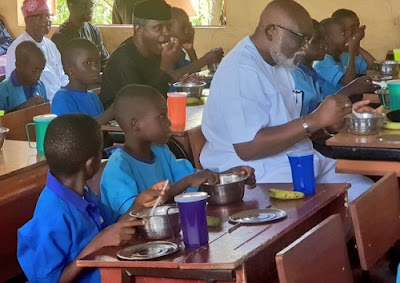 The Vice President of Nigeria, Yemi Osinbajo was captured in a photo eating with Primary school pupils during his visit to Ondo State. Watch video after the cut…

In a bid to assess the Federal Government’s Homegrown School Feeding programme during his working visit to Ondo State, the vice president has been seen doing the unbelievable inside a school classroom.

According to reports, the Vice President of Nigeria, Yemi Osinbajo, has been captured on camera eating lunch with primary school pupils of Alagbaka Estate Primary School in Akure, during his working visit in Ondo state, on Friday, 4th May, 2018.

According to the vice president’s special adviser on media and publicity, Laolu Akande, the VP paid a visit to the school with Ondo State Governor, Rotimi Akeredolu, to assess the Federal Government’s Homegrown School Feeding Programme.

It was gathered that before sharing a meal with the pupils, he joined the English class of Primary 3B class and read a comprehension passage to them.

What’s your opinion on this?