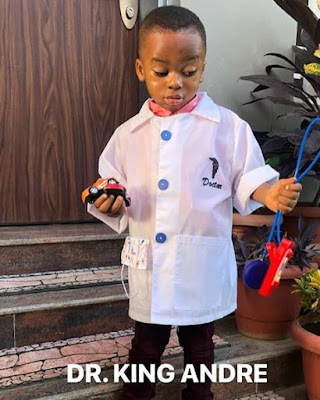 Nollywood Actress, Tonto Dike
has adorned his lovely son in Doctor’s attire.
As you can notice, the Nigerian
actress and philanthropist is enjoying motherhood and this is believed to have
really changed her.
Latest gist has it that Tonto
Dikeh dressed her toddler, King Andre as a doctor with toys related to the
medical profession bought for the boy who shares a strong resemblance with her
ex-husband, Oladunni Olakunle Churchill.
It appears the 32 year old
native of Rivers State would want Andre to become a doctor in the future.
Tonto Wigo Charity
Dikeh-Churchill, better known as Tonto Dikeh, is also a singer whose career
faltered.
She is presently a single
mother who claims to have been celibate for long.
Anyway, it will be awesome if
her son ends up becoming a medical doctor…
Facebook Comments