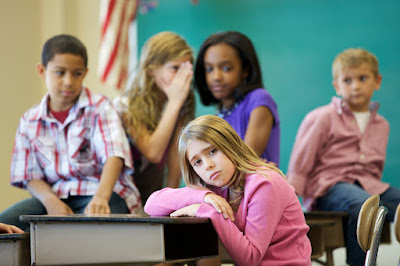 Peer-pressure is a rite of
passage that all of us go through but its impact varies from person to person. Keep
on reading to learn more.
In a nutshell, peer-pressure is
the influence that friends, people and individuals are capable of exerting on
person. Some children are able to brush it off without any issues while it
negatively impacts some other children. Sometimes adults underestimate the
effects of peer pressure on their children because they were teenagers long ago
in a different time.
Here
are 6 ways in which peer-pressure can negatively affect a child.
They are listed and explained
below in order of increasing importance
1.
A Dip In Self-Confidence:
Just as some influences can be
positive, some influences can be negative too. Peer pressure can take a
normally self-confident child and make him/her someone who is not sure about
themselves and has low self-esteem. Low self-esteem and a lack of confidence in
turn might impact a child’s general well-being.
2.
Academics Are Affected:
For teenagers, it is important
they be accepted by their peer group. This means that their peer group’s
approval gets placed above that of their parents and teachers.
This in turn has a direct
effect on their academics. Sometimes their academics are affected because
despite being capable of performing well, they choose not to because in the
eyes of their peers it makes them look ‘uncool’. Sometimes their academics are
affected because in an effort to fit in with their peer group, they place more
emphasis on being social rather than working on their academics.
3.
Can Easily Adopt Dangerous Habits:
The more extreme forms of peer
pressure propagate bad habits such as alcohol consumption, smoking, and drug
abuse. Technically, teenagers know that these are not good habits to cultivate
but they excuse it with the brash confidence youth and are also motivated by
the need to feel accepted. At this point of time, long term consequences don’t
really occur to them.
4.
Makes Them Feel Ashamed Or Bad About Themselves And Their Family:
At the average school, the
student body is composed of students who come from various economic
backgrounds. Sometimes these economic backgrounds are vastly disparate and for
many children, this becomes a bone of contention.
If they come from poor economic
backgrounds or come from a family which might not give them money to spend
extravagantly, children end up feeling bad or ashamed about themselves and
their family, because in the eyes of their peers, they are somehow ‘lesser’ or
‘weird’ individuals.
5.
Distances Them From Family And Friends:
It is common for teenagers to
think that nobody understands them and that the whole world is against them.
However, in a few cases, the influence of peer pressure is such that it draws
teenagers completely away from family and friends who mean well. They shut
themselves off and fall into bad company.
6.
May Engage In Self Harm And Suicide Ideation:
Sometimes the impact of peer
pressure on teenagers is so bad that they can hardly stand to be in their own
skin, are distanced from family and friends and become depressed and anxious.
In such instances, teenagers could attempt self-harm or even dream of
committing suicide, engage in suicidal thoughts and even ultimately engage in
suicide.
Dear friends, “A stitch in time
they say saves nine”. The type of friends/peers you keep says a lot about you.
Let’s watch over it. For indeed posterity shall reward us all.
Do have a nice time, and
remember to share this with others. It will also be awesome to know your say on
this article; kindly leave a comment.
Written
By:
Ifediora,
Franklyn Ifeanyi
(Youth
Activist and Political Analyst)