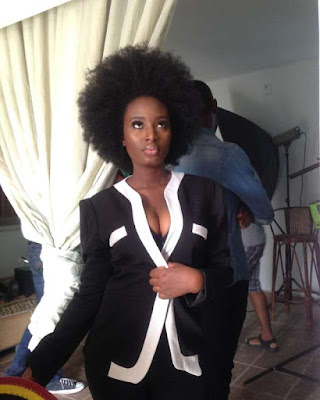 Actress Adebimpe Oyebade was
reported to have said during an interview that she does not need any man in her
life. Read more to get the full details of the gist.
Adebimpe Oyebade, a Nollywood
actress, who was crowned “The Best New
Actress 2018” in the Yoruba section of the City People Awards ahead of so
many big names in the industry, has shared how she stumbled on acting and why
she doesn’t have a man at the moment.
Below are excerpts from an
interview with Adebimpe Oyebade on Vanguard:
You just won Best New Actress 2018 (Yoruba) at the City People
Magazine Awards that held last Saturday. What’s the feeling like, in view of
having being in the industry for just two years?
Actress
Adebimpe Oyebade:
I
feel great. It is by the grace of God and hardwork. I joined the industry in
2016 but started professionally in 2017, after my NYSC in Benin in 2016. I
started with modeling when I was in the university but didn’t go professional
until my service year in Edo State.

What spurred your interest in acting?
Actress
Adebimpe Oyebade:
Honestly,
acting was never in my plans; as a child I wanted to be an air hostess or a
newscaster. Acting happened by chance for me. During my NYSC I got information
about a movie audition, the director was casting for a lead role of a movie. I
decided to audition for the role, it was an online audition, so, I sent
different videos to the email that was attached to the message that I got.
Eventually, I got selected to play the role; the movie was titled ‘Agbede Meji’
(cross road) by Yomi Fabiyi. I acted alongside Gabriel Afolayan. After the
production of the movie I went back to Benin to complete my service year. The
movie however got a lot of good reviews and that got me so many acting
opportunities.
Are you in a relationship?
Actress
Adebimpe Oyebade:
I’m
very single and not searching. I’m focused on my career so I don’t need any
man.
You mean having a man in your life will disrupt your career?
Actress
Adebimpe Oyebade:
I
don’t mean it that way, if I meet someone today and I like him then why not?
What I’m trying to say is that I’m not desperate to be in a relationship.
I think her notion isn’t bad or
wrong. I am also good in relationship matters, and I can say that some
relationships inexistence ain’t meant to be, just that one or both of the
partners decided to do so because others do.
There are times in a person’s life
that relationship isn’t of utmost priority; and I am sure that’s what she is
trying to say.
More success to her as she movie
on with her movie career.
Facebook Comments