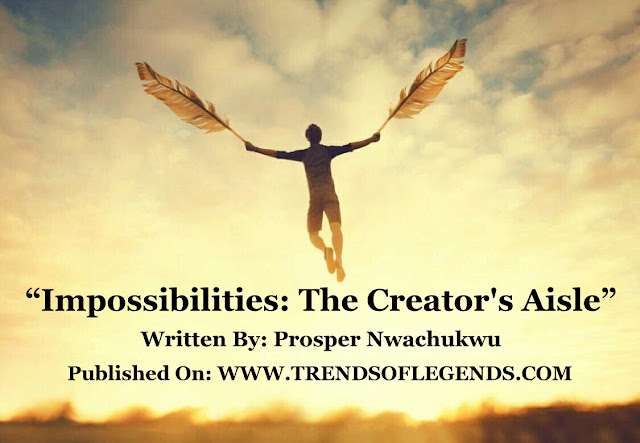 I was
just thinking, without impossibilities would there be any need for God? Such a weird
question you may say. But let me reiterate my point; if man could solve all his
problems then man wouldn’t need God in the first place.
To a
very large extent, God created man with the innate ability to proffer solutions
to issues, to be a problem solver and ultimately to make his life better and
more meaningful. Hence, man could build houses to solve the problem of shelter;
he could manufacture clothing to save himself from cold and of course to cover
his nakedness; he could grow and produce food to save his stomach from
starvation, and he could also produce drugs in their different categories to deal
with various diseases that have been combating to end his short life.
In the
recent years, advances in technology have greatly broadened the scope of what
man could achieve. In fact, things termed ‘impossibilities’ in the past few
centuries have been made possible in this generation – courtesy of modern technology.
For
instance, in the 17th century and beyond, who would have thought that a man (not
a wizard) could ever fly in the air by any means, or that a simple man (not a sorcerer)
could talk to another man at another geographical location, in real time.
The thought
of traveling a very far distance (possibly to another continent) within the
shortest possible time would have been dismissed as mere fiction. These and
many more astounding breakthroughs of science could deceive one into thinking that
man is actually consciously trimming down his ‘impossibility list’ and that in
the near future, the word ‘impossibility’ could become obsolete. How funny!
The
irony in the whole panorama is that it is becoming clearer that as man is advancing
in technology, things get more complicated; man’s bid to solve a particular
problem has always resulted in him creating more problems for himself – often
times, the latest problem becoming more convoluted and sophisticated than the former
(the prevalent environmental pollution and ozone depletion is a satisfying
example). The ripple effect is that man sees himself running in a cycle of problems;
the more he solves, the more he has to solve!
Without
much ado, this reasonable twist has helped buttress the very fact that man
cannot and will never be able to solve all his problems. Hence impossibilities will
always remain. We come across impossibility in every aspect of our lives. Sometimes
it could be as simple as a late appointment and we wish time should just slow
down and wait for us. In extreme cases, it could be a particular ailment which
has defiled all medical expertise, or a deformity (loss of a part of the body) which
cannot grow back and to efficiency.
It
could as well be a mistake made in the past and we wish to go back and make amends.
Most hurtful of all, it could be the untimely death of a loved one and we wish
he could live again. The list goes on and on. And the more we realize that these
problems are beyond our capacity to handle, the more frustrated we tend to become.
We cannot
help but find ourselves trying to adjust to these ‘impossibilities’, trying to
see them as the bitter side of life and trying to make necessary adaptations. Yet,
deep within us, we want to live above these ‘impossibilities’.
We don’t
want any limitations whatsoever; we want to lead a perfectly healthy life; we don’t
want to get rid of any deformity we may have; we want to leave a life free from
guilt of past mistakes; we don’t want to lose our loved ones; we don’t want to
die either – we want to live forever!
Sadly enough,
they’re impossibilities, you may rush to conclude. But wait a minute! But if they’re
actually impossibilities would we have thought about them in the first place?
That the mind can conceive something is enough evidence that such thing can be
achieved, no matter how utopian it may seem. Those are there in our minds because
they’re things that can actually be achieved.
Yes, The
Creator has engineered those thoughts into us as a connecting line to Him. Those
thoughts are there to remind us of our limitations and vulnerability, and the
urgent need to connect to a superior being, more power than we are, who is able
to make all thing possible. Yes, ALL THINGS!
In the
scriptures, He boldly declared; ‘I am the
Lord, the God of all flesh: is there anything too hard for me?’ (Jer.32:27). In another place the
scripture proclaimed, ‘with God ALL
THINGS are possible.’ (Matt.19:26).
This is
good news to the frustrated man. It is like when a man is dying of thirst and beholds
a spring gushing out water from afar off. If it meant crawling, rolling or
dragging himself to the water spring, the dying man would surely do that.
Now God
has openly declared his ability to do all things. The REAL LIFE stories of the scriptures
are evidence backing up His claims. We were told of how He parted a sea, how He
healed devastating diseases like leprosy, how He turned a staff to a serpent,
how He caused a bush to burn while the vegetation remained intact, how he defiled
time and caused the sun to stand still.
Trending Now :  "What To Do To Someone Who You Love So Much But Doesn’t Feel Anything For You" (Issues on Love, Sexuality, Relationship & Marriage)

And
then in the new testament when He took on flesh and dwelt among men (according
to John 1:1-14), we were told of how
He turned water to wine, healed the sick, raised the dead, walked upon the sea,
and commanded the elements to obedience. These and many more speaks of the ability
of this God to answer the yearnings of man and turn his impossibilities around.
Again
He said in His word, ‘call upon me in the
days of trouble and I will deliver you, and you will glorify me’ (Ps. 50:15).
Days of trouble for man are days when he’s faced with the things he cannot handle
– his impossibilities.
God had promised to answer in these days if only we
can be humble enough to acknowledge and beckon on Him. And the interesting thing
is that He is very much eager to answer because that is the only opportunity He
has to show Himself and confirm His word.
‘I don’t need God’, you may
still argue; ‘if I can’t handle my
problems, so be it’. You are like one who is starving and saying he doesn’t
need food. The simple truth is this; if you have impossibilities in your life,
then you need the God of impossibilities.
Written
By: Prosper Nwachukwu (Nigerian Writer & Poet)
To
have your articles, poems, stories, Biography, or any other forms of written
works to be published on this blog, kindly CONTACT US HERE.
Facebook Comments