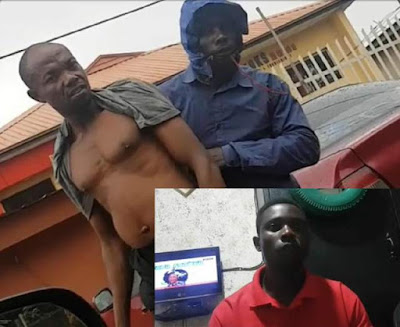 According to reports, four days
ago, a motorcycle rider, lost his manhood after an unidentified penis thief
touched his leg and his private part suddenly disappeared, has reported to have
gotten it back. See details and watch video.
Below is the full detail of the
gist:
According news updates, the motorcyclist
narrated the strange ordeal to an Instagram user, @Sleeq2dabone, who had shared
the bizarre story and videos on his Instagram page.
Giving an update on the strange
case, @Sleeq2dabone shared two new videos of the Okada man, identified as
George Innocent, summarizing his scary ordeal.
He also revealed that his penis
has been restored back adding that he confirmed with an unidentified hospital.
Innocent also claimed that the
doctors told him to have sex with a woman to confirm if his manhood is now
functioning properly.  Hmmmmmm!
The Okada man revealed that he
initially refused but at the doctor’s incessant he went to a brothel adding
that it was the first time he would patronize commercial sex workers. Lol!
Reports have it that the penis
thief hit the bike rider on his legs with a magic ring he wore on his fingers.
The timely intervention of the
police saved the penis thief from jungle justice.
The incident was reported to
have taken place at Omole Phase2, Lagos State.
Ember months are here again,
strange things would begin to happen, especially in Lagos State, Nigeria.
Watch Video Below:
Trending Now :  ALBUM: Busta Rhymes - Extinction Level Event 2: The Wrath of God (The Deluxe Edition)