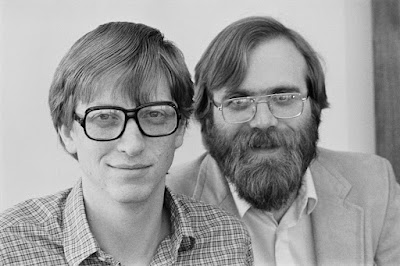 In
this article, Bill Gates narrates
the moment Paul Allen showed him a new computer called the Altair 8800, which
marked the end of Gates’s college career and the beginning of Microsoft.
Photo
Description: Microsoft
founders, Bill Gates and Paul Allen, in 1983 just after completing MS-DOS for
the Tandy laptop and signing a contract to write MS-DOS for IBM. [Photo: Doug
Wilson/Corbis/Getty Images]
I
met Paul Allen when I was in 7th grade, and it changed my life.
I
looked up to him right away. He was two years ahead of me in school, really
tall, and proved to be a genius with computers.
Later,
he also had a very cool beard, the type I could never pull off myself. We
bonded over the teletype that some students’ mothers had bought for the school
and had connected to a remote mainframe.
Eventually
we were spending just about all our free time messing around with any machine
we could get our hands on. At an age when other high school kids were sneaking
out of the house to go partying, Paul and I would sneak out at night to go use
the computers in a lab at the University of Washington.
It
sounds geeky, and it was, but it was also a formative experience, and I’m not
sure I would have had the courage to do it without Paul. I know it would have
been a lot less fun. (“Borrowing” computer time illicitly would become
something of a theme for us. Later, when I was a student at Harvard, I got in
trouble for letting Paul use the campus computer lab without permission).
Even
in high school, before most people knew what a personal computer was; Paul
predicted that chips would get super-powerful and would eventually give rise to
a whole new industry. Many people don’t know that Microsoft wasn’t the first
project we did together. That was something we called the Traf-O-Data, a
machine that would analyze the information gathered by traffic monitors on city
streets.
We
thought it was a great demonstration of the power of these new devices. We got
a prototype up and working and we imagined ourselves selling it all over the
country. But no one wanted to buy the machines, and we had to wind it all down.
We
decided to start our next, more successful venture in December 1974. Paul and I
were both living in the Boston area—he was working, and I was going to college.
One day he came and got me, insisting that I rush over to a nearby newsstand
with him.
When
we arrived, he showed me the cover of the January issue of Popular Electronics.
It featured a new computer called the Altair 8800, which ran on a powerful new
chip. Paul looked at me and said: “This is happening without us!” That moment
marked the end of my college career and the beginning of our new company,
Microsoft.
In
those days, the chips were so limited that you couldn’t do what’s called
“native development”—you couldn’t use a machine with that chip in it as you
were developing the software for it. That made writing code for those chips
pretty challenging.
Paul
had a great idea: to write some code that would let us emulate those chips on a
more powerful computer, then port it over to the machine with the less powerful
chip. That breakthrough was important for a lot of Microsoft’s early success,
and Paul deserves credit for it.
As
the first person I ever partnered with, Paul set a standard that few other
people could meet. He had a wide-ranging mind and a special talent for
explaining complicated subjects in a simple way.
As
an adult, he pursued a huge spectrum of interests, including the arts,
conservation, and artificial intelligence. He wanted to prevent elephant
poaching, promote smart cities, and accelerate brain research.
Because
I was lucky enough to know him from such a young age, I saw that before the
rest of the world did. Once, when I was a teenager, I got curious about (of all
things) gasoline. What did “refining” even mean? I turned to the most
knowledgeable person I knew. Paul explained it in a super-clear and interesting
way. It was just one of many enlightening conversations we would have over the
coming decades.
Paul
was cooler than I was. He was really into Jimi Hendrix, and I remember him
playing “Are You Experienced?” for
me. I wasn’t experienced at much of anything back then, and Paul wanted to
share this amazing music with me. That’s the kind of person he was. He loved
life and the people around him, and it showed.
His
generosity was as wide-ranging as his interests. In our hometown of Seattle,
Paul helped fund homeless shelters, brain research, and arts education. He also
built the amazing Museum of Pop Culture, which houses some of his huge
collection of music, science fiction, and movie memorabilia.
When
I think about Paul, I remember a passionate man who held his family and friends
dear. I also remember a brilliant technologist and philanthropist who wanted to
accomplish great things, and did.
Paul
deserved more time in life. He would have made the most of it. I will miss him
tremendously.
— Bill Gates co-founded
Microsoft along with Paul Allen. He is now Co-chairman of the Bill &
Melinda Gates Foundation.
Paul
Allen really deserves more time in life before leaving; but the thing that
makes his lifetime inspiring is that he achieved exceedingly great things for
the time he has spent on earth.
Thanks
for reading, right here on this blog, we make sure that we still talk about
Legends, their trends, impacts, and achievements in life, in as much as we
carry out other activities.
Please
make sure you share this life-inspiring experience of Bill Gates with Late Paul
Allen. And feel free to check out other posts, hoping to see you tomorrow.