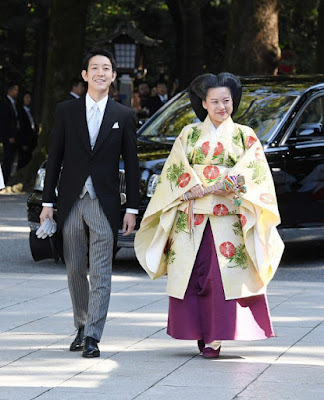 Princess Ayako of the Japanese imperial family has given up her royal title after marrying a commoner Kei Moriya.
The 28-year-old princess, according to The Independent, married 32-year-old Moriya, an employee of shipping company Nippon Yusen.
Although
Japanese royals have been given the freedom to marry anyone for the
past 3 generations, women in the imperial family give up their status
when they marry commoners, while commoners who marry princes become a
part of the imperial family.
Princess Ayako, who will become Ayako Moriya after the wedding papers are signed, married in a traditional ceremony at Tokyo’s Meiji Shrine.
“I’m
filled with joy to get married and to have so many people visit us at
the Meiji Shrine and congratulate us,” she said after the ceremony.
Sacrificing royalty for love?
Facebook Comments