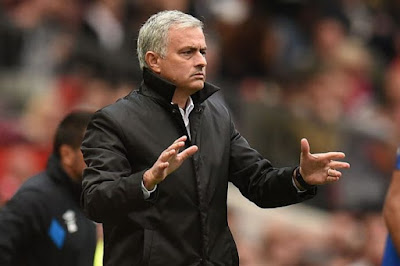 Jose Mourinho said on Friday that Manchester United can only start to think about challenging for the Premier League title once they have fought their way back into the top four of the league table. Details below.

This Saturday, United team will travel to Bournemouth, nine points behind table-toppers Manchester City and Liverpool and five points off the final Champions League qualifying spot occupied by Arsenal.

Mourinho believes eighth-placed United, who are unbeaten in their last three league games, will improve and close the gap on their rivals over the next couple of months.

Jose Mourinho said this to a news conference:

“When you are outside the top four, I don’t think you should speak about the title.”

“When you are top four, you can look up, see the distance, look to the fixtures, to the calendar. You can look to the situation at the moment, injuries, suspension, form and then you can feel it.”

“But in this moment, we are outside the top four so the point is now to get the points.”

“We need to try and be at the end of December in a better position than we are in now at this moment.”

Forwards Jesse Lingard and Alexis Sanchez were among the substitutes against Everton last weekend.

“The pair are in a much better condition to play a role at Bournemouth.”

“Jesse and Alexis are in a much better position than last week. Last week was an effort from them to be available to help the team.”

“But now it is a different story. Now, Alexis and Lingard are better after one good week of work with the team, They are ready to play really.”

In-form Bournemouth, currently sixth in the league, will look to secure a fourth victory in five league matches when they host United.

Jose Mourinho made it known that he was not surprised by Bournemouth’s steady progress under Eddie Howe and expected them to compete for the Europa League qualification spots this season.

“Same manager, clinical scouting work. I wouldn’t say it’s a big surprise. After promotion, was the season of being a Premier League team and staying. Now they want more than stability and are fighting for Europa League position.” Mourinho added.