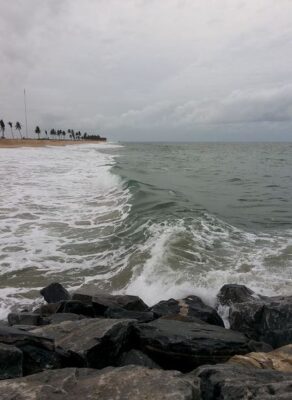 28-year-old Man Drowns On Elegushi Beach: The lifeless body of a 28-year-old man identified as Sodiq Aremu who jumped into Elegushi beach, in the Lekki area of Lagos has been recovered and taken to the morgue.

Sodiq Aremu, a native of the Ona Ora area Oyo was last seen alive on Thursday, 7th July when he suddenly dropped his bag and jumped into the beach.

It was learned that all efforts to trace and rescued him proved abortive.

However, on Saturday 9th July at about 1:30 pm the victim’s corpse was found floating on the surface of the ocean.

Sequel to the report, police detectives visited the scene of the. Incident and took photographs of the scene.

Confirming the incident, Spokesperson Lagos State Police Command SP Benjamin Hundeyin said ”the corpse of the man who jumped into the beach was seen on 9th July at about 1:30 pm floating. His corpse has been recovered and evacuated into the morgue. The investigation is ongoing.”