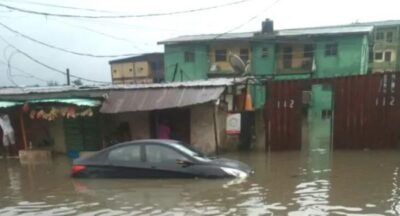 8-year-old Boy Swept Away By Flood In Anambra

8-year-old Boy Swept Away By Flood In Anambra: An 8-year-old boy, identified as Chinwe, has lost his life after a surging flood flushed him into a deep erosion.

The incident happened late on Thursday behind the school of Nursing, Nkpor in Idemili North Local Government Area of Anambra State.

It was gathered that a combination of surging floods coming from the Immaculate Hearts Sisters Convent and Our Ladies Industrial Centre all in Nkpor had swept the boy into the gully.

His drowned corpse was said to be recovered on Friday from about half a kilometre away from the spot where he plunged, with one of his hands broken.

The victim, who is a son of a vulcanizer in the area, was said to be returning from a journey with his mother when the incident happened.

It was gathered that the boy while approaching the gully from where he and his mother were expected to pass through to their home, started running faster than his mother, thereby prompting his mother to start shouting.

His mother’s shouts and calls for him to turn back fell on deaf ears, as he continued running until he reached the narrow part of the gully.

Trending Now :  A Side Chick Is Everything A Man Wants In His Woman - Media Personality, Jon Joe

It was gathered that in his attempt to jump over the gully, the surging flood swept his feet off and he plunged into it.

More casualties were averted when an attempt by his mother, who was carrying another baby on her back, to also jump into the gully, in search of her son, was prevented by some youths within the neighbourhood.

The youths quickly jumped into the gully in search of the victim but could not see him.

The bereaved parent, who refused to talk about the incident hired a vehicle which conveyed the corpse from Nkpor to their home town.

Sympathisers said the death of the boy meant that the family had lost three out of their four children.

They blamed the state government for allowing the gully to expand from an ordinary minor hole to a big gully over the years instead of constructing a ring or box culvert to link the road to the streets.