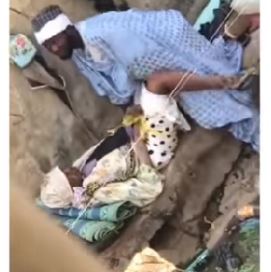 Alfa’ Caught Having S3x With Mentally Challenged Woman In Ibadan

Alfa’ Caught Having S3x With Mentally Challenged Woman In Ibadan: A man reported to be an Alfa has been seen in a video having s3x with a mentally challenged woman in Ibadan.

In a video going viral on Facebook, the man is seen approaching the woman in a dirty backyard where she lay on a concrete floor with her head resting on a mat.

He then looks around, pulls his trousers, looks around again, and appears to penetrate the woman.

Observers filming from a nearby house are heard whispering in surprise.

“Alfa o,” a woman is heard saying, shock evident in her voice.

“Stop speaking loudly,” the woman cautions him as they watch and film the Alfa in the act.

The woman expressed shock that the same Alfa who preaches to people can engage in such an act.

The man filming is heard calling the name of Jesus repeatedly while exclaiming in shock.

“This one is happening live in Ibadan o. Jesus Christ. Ahhhh. A man of God for that matter,” the man adds as he continues filming.

At this point, the man is seen standing up from the woman’s body while pulling his briefs and trouser back up to his waist.

The woman then points out that it is ”Alfas” like the man they are watching that is spoiling the reputation of the genuine Alfas and men of God.

While the pair is still reeling from the shock, the alleged Alfa opens a calabash, brings out a handkerchief, and uses it to wipe the mad woman’s private part while looking around to be certain no one is watching.

“Jesus, he wants to use it for juju,” the pair scream.

The video ends with the man walking out, leaving the mad woman lying on the same spot.