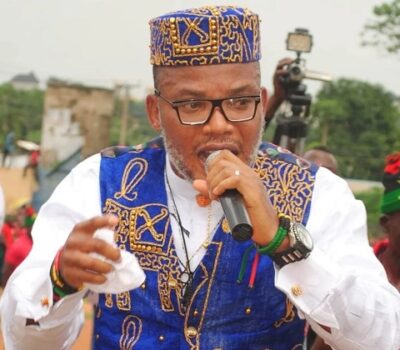 Appeal Court Reserves Judgment On Nnamdi Kanu: The Court of Appeal sitting in Abuja, the Federal Capital Territory, has ruled on the case against the detained leader of the proscribed Indigenous People of Biafra, Nnamdi Kanu.

The court on Tuesday, reserved judgment on an appeal filed by the leader of the Indigenous People of Biafra, IPOB, Nnamdi Kanu, to quash the terrorism and treasonable felony charge the Federal Government preferred against him.

The IPOB leader, who is currently facing trial before the Federal High Court sitting in Abuja, had through his lead counsel, Mike Ozekhome, SAN, approached the appellate court to query the legal competence of the charge pending against him. He specifically asked the apellate court to review the April 8 ruling of the trial court which struck out only eight out of the 15-count charge.

Insisting that the charge FG entered against him had no basis in law, Kanu, in his appeal dated April 29 and marked CA/ABJ/CR/625/2022, applied to be discharged and acquitted. He also appealed to the court to order his release on bail, pending the determination of his appeal.

Though the appeal was initially fixed for October 11, however, following an application the embattled IPOB leader filed for abridgement of time, the appellate court brought the matter forward for hearing.

At the hearing of the appeal today September 13, a three-man panel led by Justice Jummai Hanatu, said it had no need to delve into the issue of bail since the substantive appeal was ripe for hearing.

“My lords, he was enjoying this bail without breaching the terms. However, he was in his ancestral home when agents of the Respondent invaded his home in September 2017. He barely escaped alive by sheer providence and found himself first in Isreal and later in London.

When the Appellant travelled from London to Kenya, agents of the Respondents, on June 27, 2021, forcefully abducted the Appellant, tortured and renditioned him back to the country without following any extradition process” Ozekhome submitted

Trending Now :  How 41-Year-Old Nigerian Farmer Was Caught Carrying A Human Skull Inside A Carton

He argued that under the Doctrine of Speciality as provided for in section 15 of the Extradition Act, FG, ought to have proceeded to try Kanu on the five-count charge he was initially facing before he escaped from the country. Ozekhome also argued that Kenya, being the country from where Kanu was arrested and extraordinarily renditioned back to Nigeria, ought to have authorized his extradition.

“This allegation of his forceful abduction and rendition was never denied by the Respondent. More so my lords, the charge appears to give the lower court a global jurisdiction over offences that were allegedly committed by the Appellant, without specifying the location or date the said offences were committed.

There was no need for the lower court to have retained the remaining seven-count charge.

We are therefore urging my lords to strike out the remaining counts and hold that the Respondent has not established any prima-facie case against the Appellant for which he could be tried”, Ozekhome added.

Meanwhile, FG, through its lawyer, Mr. David Kaswe, urged the court to dismiss the appeal for want of merit. Kaswe argued that the IPOB leader was brought back to the country by due process of the law. He argued that the charge has been amended seven times owing to the conduct of the Appellant.

“My lords, it took four years and huge resources to get the Respondent arrested and brought back to face the charges against him.

The Prosecution is ever willing and eager to proceed with trial of the Appellant. We are saying that the trial court was even wrong to have struck out the eight counts as it did.

It is only after FG has produced all its witnesses and tendered its evidence that the Appellant could claim that no prima-facie case was established.

Finally, we urge this court to dismiss the appeal for lacking in merit” Kaswe said

After it had listened to both sides, the panel said it would communicate a date for the judgment.