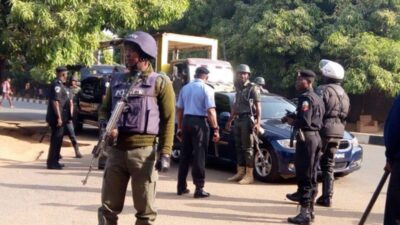 Assistant Police Superintendent Accused Of S*xually Assaulting Teenage Girl Detained In Enugu Cell For 5 Days: Oke Vincent, an Assistant Superintendent of Police in Nigeria, has been accused of s*xual assault, according to SaharaReporters.

He was accused of s*xually assaulting a 17-year-old girl at the police station.

Vincent is serving at the Awgu Division of Enugu Command of the Nigerian Police Force.

The police officer was also accused of extorting N114,000 from the family.

The father of the victim, Mr. Godwin Utobo, who disclosed this in a petition to the state Commissioner of Police, which SaharaReporters obtained on Friday, said the assault happened on March 18, 2022.

He said since he lodged complaints to Awgu police division, nothing has been done about the matter.

Narrating the event, Utobo, a native of Afam Agunese Mmalu Awgu, in the Awgu local government area of Enugu, said his teenage daughter, Precious Ojanukwu, was arrested on March 14, following a complaint by one Mr. Ndubuisi Michael who operates POS (Point of sale) point at Awgu Orie Market. Michael had accused Precious of stealing his money.

According to him, her daughter worked for Mr Ndubuisi as POS attendant for four months before she quit the job.

He said, “We asked her to quit the job because her employer didn’t keep to the agreed salary payment of N10,000 every month. So, she quit and a few days later, Ndubuisi reported her to the police, claiming she stole over N2 million from him.”

Utobo said his daughter was arrested and detained for five days and while she was in police custody, ASP Oke Vincent, who was the Investigating Police Officer (IPO), s*xually assaulted her.

“He put his hand in his private parts and fingered her several times,” Utobo said.

The petition obtained by SaharaReporters on Friday partly read: “That consequent upon the complaint and subsequent arrest of Precious Ojanukwu, she was detained till the 19th day of March 2022 which was five days after the arrest and detention. That during the period she was detained precisely on the 18th day of March 2022, she asked the IPO who was ASP Oke Vincent to give her water because she is an asthmatic patient.

Trending Now :  How Man Found Out He Is Not Father of His 5 Children After 20 Years

“That the s*xual assault on my daughter by ASP Oke Vincent was reported to the D.P.O. SP Emmanuel Ijebuonwu, and the DCO SP Kelvin Ugwu and a meeting was called on the 19th day of March 2022 in the DPO’s office. That when the DPO confronted ASP Oke Vincent, that he never denied the s*xual assault on my daughter. That after the meeting, I have waited to hear from the station the outcome of the inquiry but nothing has been done.”

The petition further read, “That ASP Oke Vincent on the same March 19, 2022, after the meeting hurriedly collected a cash sum of twelve thousand naira (N12,000) from Jacinth Ojanukwu, my wife as bail out of (sic) my daughter. ASP Oke Vincent also collected One hundred two thousand naira (N102,000) from Jacinth Ojanukwu. On the 29th day of March 2022, the said ASP Oke Vincent who was never remorseful of the s*xual assault on my daughter, called me to Awgu Police Station and forced me to signed an undertaken that if I fail to pay Ndubuisi Michael N700,000, that he will charge my daughter to court.

“In view of the foregoing, I am sad about the s*xual assault on my daughter who is only 17 years old. I pray to you sir to use your good office to investigate this matter, considering the fact that these are the kind of heinous crime that give police bad image in our society, also Miss Precious Ojanukwu, my daughter has been psychologically and emotional traumatized.”

The petition was also copied to the state governor, Ifeanyi Ugwuanyi, Minister of Women Affairs and Social Development, and the Women’s Aid Collective (WACOL), a human rights organisation based in Enugu.

Collaborating the story, Mrs Ojanukwu told SaharaReporters that Ndubuisi, who initiated the arrest of her daughter, has been begging the family to forgive ASP Oke.

According to her, Ndubuisi has said he is no longer interested in the case provided they forgive the police officer.

She said that since incident, ASP Oke Vincent has not shown up at the State Criminal Investigation Department (CID) despite several invitations. “Now the police want to frustrate us to abandon the case,” she added.

Several efforts to get the reaction of the state police command’s public relations officer, DSP Daniel Ndukwe were unsuccessful as he did not answer calls made by SaharaReporters.