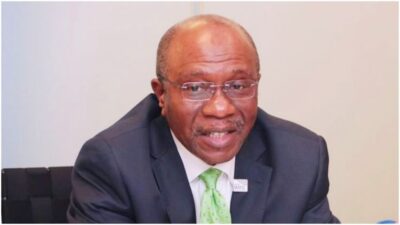 CBN Reveals Why Naira Is On A Free Fall Against Dollar At The Black Market: The Central Bank of Nigeria CBN has revealed why the naira suffered rapid crash against the dollar at the official and black markets in a matter of days.

CBN said the reason is because of non-remittance of dollars to foreign reserves by the Nigeria National Petroleum Corporation (NNPC).

In a report released, the apex bank said the NNPC and its subsidiaries are the sole managers of crude oil which accounts for more than 80 percent of Nigeria’s Foreign Exchange (forex) earnings. The CBN in the report pointed that it does not print forex and cannot be the ones to make it available.

The report titled “The forex question in Nigeria: Fact sheet”, reads in part

“Domestically, there has been zero dollar remittance to the country’s foreign reserve by the NNPC, insisting that the CBN does not print dollars.

As noted by the CBN Governor, Godwin Emefiele, monetary policy alone cannot bear all the burden of the expected adjustments needed to manage these difficulties. It’s our collective duty as Nigerians to shore up the value of the naira.”

According to the apex bank, Nigeria earns foreign exchange from four sources – proceeds from oil exports; proceeds from non-oil exports; diaspora remittances, and Foreign Direct/Portfolio Investments (capital flows). The bank noted that the past six years have been characterized by two recessions triggered by a slowdown in the global economy as well as the effects of COVID-19 pandemic.

“Considering Nigeria’s heavy dependence on oil exports for foreign exchange earnings and government revenue, the impact of the oil market crash severely affected the government’s naira revenue and other macroeconomic aggregates including economic growth. Hence, the rate of exchange between the naira and other currencies has widened over the past few years.” the report in part read

On the key facts about the economy, the apex bank said the CBN issues legal tender in Nigeria (naira) and does not print foreign exchange. It said the pressure on the naira has both local and global perspectives.

“There is un-abating demand for foreign exchange for both goods and services, thereby creating a demand challenge. The current exchange rate of the Naira, like other major currencies, is not driven by cryptocurrencies, given the volatility in the cryptocurrency space, which lost over two trillion in the past two years in face of high inflation.

The high inflation in other climes and the hike in interest rates have heightened pressures on the exchange rate. This has triggered capital flow reversals from Emerging Markets and Developing Economies (EMDEs) to more advanced economies.

The United States (U.S.) dollar is gaining against all major currencies of the world. The imbroglio in Nigeria’s tertiary educational sector has triggered an exodus of students from Nigeria schools, with its attendant payment of fees in foreign exchange. Summer travels by Nigerians has also impacted on the demand side of the foreign exchange market,” it said.

According to the apex bank, Nigeria is not producing, hence the propensity to import is directly affecting the value of the Naira but the apex bank has attempted to address the challenge through policies such as the RT200 FX Programme, 100 for 100 Policy on Production and Productivity, Naira4Dollar Scheme, Anchor Borrowers’ Programme (ABP), Export Development Facility (EDF); and the Non-Oil Export Stimulation Facility (NESF).

The bank said that all these and many of its other initiatives were aimed at diversifying the economy, stimulating production, enhancing inflow of foreign exchange, maintaining the stability of the naira against other currencies and reducing foreign exchange demand pressure.