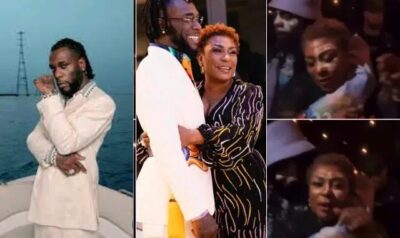 This comes after Burna became Africa’s first artiste to perform at the Billboard Music Awards.

The Billboard Music Awards held on Sunday May 16, had in attendance Burna Boy and his mother.

The singer later took to the stage to perform some of his hit songs, therefore becoming the first African artiste to perform at the event.

Reacting to her son’s latest feat, Bose Ogulu took to her Instagram page to praise him for the record breaking achievement.

According to her, Burna Boy is the first African artiste to not only perform at Billboard but also at Grammys, BET Hip-hop awards, and Brits.

She wrote: “A lot of firsts this week @burnaboygram became the first African artist to perform at the BBMA’s, Grammy’s, BET Hip-hop Awards and Brits…. Also, our First trip to Vegas!”.

This is the number nine quote of the one thousand (1000) quotes from the archive of quotes and philosophies by the Legend NDJP. Enjoy it as you read more… We will keep updating these quotes one after the other until we have updated the 1000th quote from NDJP.  This […]