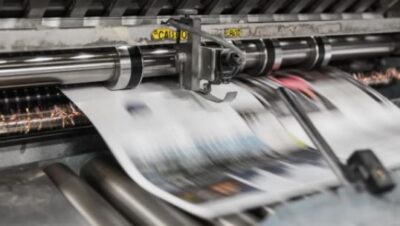 Controversies As Akwa Ibom’S $1.5m Printing Press Rots Away: According to Daily Post, the $1.5million worth of Akwa Ibom Newspaper Corporation Rotary Press was gained by former governor, Godswill Akpabio has remained redundant after about seven years of its installation and commissioning.

The press comprises a Supra Setter A105, also known as a Computer To Plate (CTP) machine, and a Goss Community Press with a web offset press. It can print 17 color pages, 32 black and white pages of a newspaper, and can produce 500,000 impressions per hour, with a CTP resolution of 2,400 DPI.

The Press was built to allow the AKNC to print the state-owned Pioneer newspaper at a low cost in the state, as well as function as a commercial printing press for national and local newspapers.

However, according to DAILY POST, the machine has never printed a copy of the Pioneer since its commissioning, although the State government has yet to officially transfer over the facility to AKNC.

When contacted, Mr Silas Udo, the former General Manager of Pioneer Newspaper, revealed that the machines were not officially given over to them by the overseeing ministry, the Ministry of Information and Strategy and that none of the AKNC workers had been instructed on how to operate the machine.

The Press was never used to print the Pioneer in my time. No Pioneer staff under my watch went for training anywhere to master the workings of the Press.


“Yes, we did not receive the Press. It was a deliberate decision not to receive it as the procedural processes were not done or seen to be done. For example, the checklist to ascertain that what the government paid for, are what were sent by the manufacturers was not done. It would, therefore, have been against Civil Service procedure to sign a Stores Receipt Voucher (SRV), unless this was done after I left service.”

Also contacted, the then Production Manager of AKNC, Mr Idorenyin Umoren, revealed that he was part of the Pre-shipment Inspection Committee announced by State government to visit Goss Community Press Company in Germany, adding that the committee was not inaugurated, and the inspection to the Goss Community Press Company in Germany, Hieldelberg, never saw the light of the day.

He expressed shock that he was only informed that the machines have arrived Uyo through Onne in Port Harcourt, Rivers State, and they were expected to receive them, saying they trained no production staff of AKNC on how to operate the machines.

Also, Mr Patrick Usen, the Consultant who handled the project has blamed the Ministry of Information for the failure of the project, and called for a probe into the abandonment of the printing press.

Usen explained that the machines failed to work due to improper installation, saying the managers of the project did not follow the procedures necessary to set up a Press.

The Consultant called for a technical audit of what was supplied, what was installed, and how it was installed, as well as possible errors with the installation processes so as to correct the abnormality that had kept the machines from working.

Meanwhile, efforts to speak with Mr Aniekan Umana, who was then the Commissioner for Information who supervised the whole process of purchasing, installing and commissioning the Press was not successful as he did not pick up his calls, nor responded to text messages sent to his phone by journalists.

However, when the current Commissioner for Information and Strategy, Mr Ini Ememobong was contacted by correspondents, he said, ”when I came into the office, I visited the facility and commissioned an enquiry into issues surrounding the Press, we are working to reconcile all gray areas.


‘In line with the Governor’s determination to continue to achieve result in a most cost effective way, we had to open up the business to private investors who would come and manage the Press. Many have indicated interest and we are still considering the options. I assure you that before the exit of this administration, the Press will be taken over for proper management.”

It is unfortunate that they leave a standard infrastructure like this to rot when maximum use of it could have benefitted the state, including creating employment. Hopefully, the press will be revived and put to good use as soon as possible.