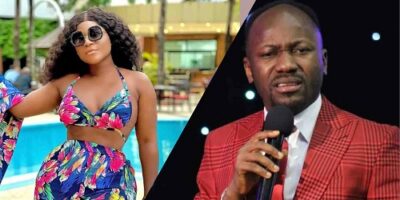 Controversial blogger, Gistlovers had made a list of celebrities it claimed had amorous relationship with the man of God.

The full list had some popular stars like: Mercy Johnson, Halima Abubakar, Shan George, Daniella Okeke, Omotola Jalade Ekeinde and so on.

“It’s sad when they kick dirt on your name with the same shoes you gave them.”