Don’t Be Fooled, 70% Of Men Abuse Their Women – BBNaija Star, Tega: Tega Dominic, a former BBNaija housemate, has given a message to ladies.

According to the reality star, guys who laud their wives and brag about their public displays of love (PDA) on social media should be avoided.

She claimed that 70% of such men abuse their women.

She wrote, “Don’t be fooled by the captions when you see them serenade their women, 70% of them Literally abuses them, the PDA no dey reach house. Sorry o my gender, after all what do I know but just know you deserve better.” 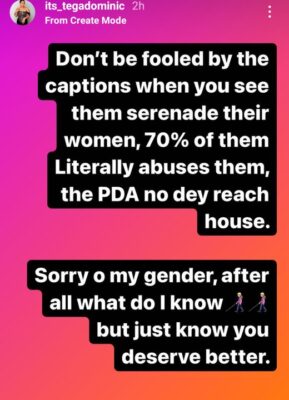 That is the reality we find ourselves in. Social media is filled with lies and everything that is not true. There is a call for people who are facing domestic violence to seek help.

Trending Now :  No Man Wants To Be With You Because You're Bitter - Bobrisky Mocks Tonto Dikeh
About Tori News Updates & Latest Gist 2022 3137 Articles
I am the GODCHILD. A High-Intelligent Brain Design of Utmost Love and Crazy Ideas . CLICK HERE TO SEE AUTHOR'S UPDATES SO FAR.