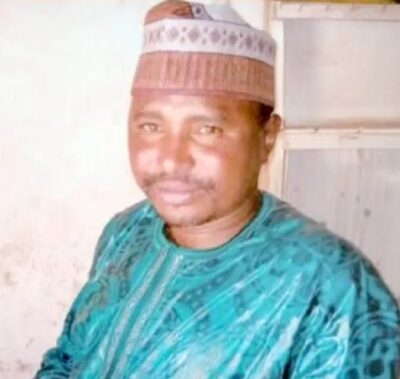 Drama As Banditry Kingpin Gets Chieftaincy Title In Zamfara

Drama As Banditry Kingpin Gets Chieftaincy Title In Zamfara: Ado Aleiro, a banditry kingpin in Zamfara has been given a chieftaincy title in Zamfara State.

The man was on Saturday turbaned as Sarkin Fulanin Yandoto by the Yandoton Daji Emirate in Zamfara State, Daily Trust reports on Sunday.

The turbaning ceremony was held hours after the emirate announced the suspension of the process.

Aleiro was billed for the turbaning by the Emir of Yandoto Alhaji Aliyu Marafa on Saturday. However, few hours to the ceremony, the process was halted on the orders of the state government, Daily Trust on Sunday learnt.

The decision to confer the title on the banditry kingpin was premised on the pivotal role he played during a recent peace process locally arranged between the emirate and the bandits terrorizing Tsafe Local Government Area.

Sources at the emirate told our correspondent that the state government had ordered the halting of the conferment of chieftaincy title on the bandits’ leader for fear of backlash from the public after the process was leaked to the media.

“The Secretary of the Emirate told me this morning that the process has been suspended till further notice. It was not in the interest of the emirate council but that of a politician in the area,” the source said.

The turbaning ceremony was held at the palace of the Emir of Yandoton Daji and was attended by the council chairman of Tsafe Local Government and the state Commissioner of Security and Home Affairs, DIG Ibrahim Mamman Tsafe (rtd).

“The bandits’ leaders and lieutenants on dozens of motorbikes also graced the occasion. They rode along Gusau-Funtua highway and had a stopover at Gidan Dawa community where residents donated cartons of soft drinks to them,” said a source from the town who did not want to be named.

“It was not clear whether Aleiro spoke at the turbaning ceremony or not but one of frontline lieutenants who spoke at the ceremony lamented how people are calling them armed criminals,” a resident identified as Sufyan told our correspondent.

“We are not armed robbers neither are we terrorists. But for the peace process to be sustained, government at the federal and state levels must do the needful by providing grazing lands, schools and hospitals for herdsmen,” he was quoted as saying.

During the botched 2019 peace deal between the state government and the armed men, a government delegation had met with Aleiro at Munhaye, a community located 15km west of Gusau-Funtua highway.

The terror kingpin had promised to lay down arms and give peace a chance but later reneged on his promise and renewed his deadly attacks on communities in Tsafe Local Government Area of the state as well as Faskari and Kankara local government areas in neighbouring Katsina State.

The bandits’ leader was the arrowhead of a deadly raid on Kadisau, a community in Faskari Local Government Area of Katsina State, where about 52 people were killed.

Shortly afterwards, the Katsina State Police Command placed a N5 million bounty on his head. Since then, he has masterminded several assaults on communities in Tsafe and Faskari local government areas of Zamfara and Katsina states.

Armed bandits have escalated attacks and abductions in communities across the state, the latest being an attack on Mada community in Gusau Local Government Area of the state.

About three weeks ago, the armed men had invaded the community, looted shops and dispossessed traders and other individuals of their valuables. The criminals had earlier shot dead 3 farmers in the community.

The bandits had also orchestrated series of abductions in Zurmi town, Furfuri in Bungudu local government and Gidan Dawa in Tsafe Local Government Area of the state.

Since the start of the rainy season, several farmers have been shot dead or abducted while tending their farmlands. Majority of such farmers in the state’s rural communities have also been blocked from accessing their farms.

In the same vein, Tsafe Local Government Area has also suffered series of attacks by the criminals since the beginning of this year. Dozens of residents had to flee Magazu, a community located 5Km south of Tsafe town and along Gusau-Funtua highway following incessant bandits’ incursions.

However, following attacks on Mada, a community situated 10km north of Yandoton Daji town, Ado Aleiro was engaged in peace talks a couple of weeks ago.

“Aleiro attended the peace talks himself. The meeting took place at the outskirts of Mada community. He was there with some of his boys and promised to halt the attacks. Government representatives, local chiefs and some community leaders were at the meeting. I personally attended the meeting also,” a resident Lawal Mada told Daily Trust.

Concerns over Katsina peace accord with bandits

There are growing concerns over the recent peace accord entered into between bandits and residents of Danmusa Local Government Area of Katsina State.

The peace agreement was said to be facilitated by security officials deployed to the area in conjunction with political and traditional leaders. The move was said to be initiated at the instance of the bandits.

Some residents, who spoke with our correspondent on the development, expressed satisfaction with the outcome of the agreement so far.

A resident of Danmusa, who pleaded anonymity, said the agreement was entered into at the local government secretariat with local government officials and traditional leaders on one hand and the bandits’ commanders and Fulani leaders on the other hand.

He added that the agreement was borne out of the fact that both sides were constrained by the insecurity in the area as the bandits themselves found it very difficult to access their basic needs while the residents found it difficult to go to farm because they were constantly under attack.

“It is true that a lot of them are seen in our towns and markets. They go about their normal activities, roam our streets, visit our shops and market to purchase their needs without any challenges.

“Likewise, our people travel to villages and towns unharmed and you could even meet them in the bush and they will neither harass nor intimidate you. So, for us it is indeed a welcome development and we hope and pray it will extend to other affected places,” he said.

Also confirming the development, a resident of Yantumaki, Muhammad Nasiru, said, “Yes, we interact freely with them now and no party harms the other.

“Initially, most of us were not happy with the peace agreement going by the kind of havoc they have wrecked in the area, but as days went by, we began to enjoy the relative peace and are beginning to leave behind those ill-feelings and forge ahead, since it was something (peace) we were desperately looking for,” he said.

When asked whether he knew who brokered the peace, Nasiru said, “No one could tell you exactly who was behind it, it was something done secretly. Some say soldiers helped facilitate it while others say it was the politicians, so it is like they didn’t want anyone to know how it was done.”

“Whatever the case, we leave everything in the hands of God. Allah will judge for those that were killed or cheated innocently. But since the time they entered into this agreement, there has been no attack, apart from what happened around Dutsinma and Safana LGAs, but not in Danmusa LGA,” he added.

When contacted, the council chairman of Danmusa Local Government, Hon. Sanusi Dangi, confirmed the development, saying the peace accord was initiated by the bandits themselves through the Ardos (Fulani leaders) in the area.

“Those Ardos approached the soldiers operating in the area and told them about the need to have a dialogue. That was even before we came into office. After dragging feet for some time, it was eventually agreed that we should come to the negotiation table. So, we met on a Wednesday, about three weeks ago, and entered into an agreement.

“We have two benefits already. One, our people are no longer afraid of going to sleep and being attacked. Two, our people can now go to their farms peacefully. So, these are our major gains so far, and the three parties (bandits, residents and soldiers) are happy about it,” he said.

When asked whether the state government was aware and in support of the peace accord, Hon. Dangi said the accord in Danmusa LGA was a litmus test and if it proved sustainable, the idea could be sold to other affected areas so that the state will enjoy lasting peace.

Commenting on the matter, a security analyst, Rtd Major Muhammad Bashir Galma, said, “Such piecemeal accord will not augur well with the people around the area. Should there be any breach of the agreement, then the problem will blow out of proportion.

“Another dangerous dimension that needs to be looked into is the kind of bandits operating in the area. Is it those religious fanatics that could use the opportunity to go about converting and recruiting members from the communities for the sake of peace? That has to be ascertained.

“Then, is it a kind of peace accord for a short time or will it last for long and what happens to other communities that are not into similar agreement with the bandits?” he asked.

He, however, said if it was truly a military facilitated truce, then the unit must have informed higher authorities and for it to be successful, the state government must be involved to cover the whole state, while noting that individual peace agreement will not go anywhere.