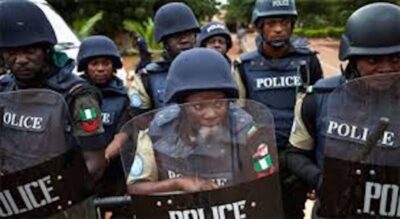 Drama As Man Bites Police Officer In Lagos: A man who bit a police officer in Lagos State has been dragged to court.

NAN reports that an Ejigbo Magistrates’ Court in Lagos State, on Thursday, granted bail in the sum of N400,000 to one Tijani Muiz, who allegedly bit the finger of a police officer on duty.

The Magistrate, Mrs A. K. Dosunmu, also ordered that the defendant should produce two sureties in like sum.

She directed that the sureties must be gainfully employed and show evidence of tax payment to Lagos State Government.

She adjourned the case until Aug. 23 for mention. Muiz, whose address was not provided, is standing trial on a three-count charge of assault, conduct likely to cause breach of peace and unlawful obstruction.

He, however, pleaded not guilty to the charge. The prosecutor, Insp Benedict Aigbokhan, had told the court that the defendant committed the offences on July 24, at 9.30 p.m. at Jakande Gate, Ejigbo, Lagos State.

According to Aigbokhan, the defendant obstructed Insp Raymond Maugbe from carrying out his official duty.

“In the course of obstructing the officer from carrying out his official duty, the defendant assaulted the officer by biting him on his left finger,” he said.

Aigbokhan added that the defendant conducted himself in a manner likely to cause breach of public peace.