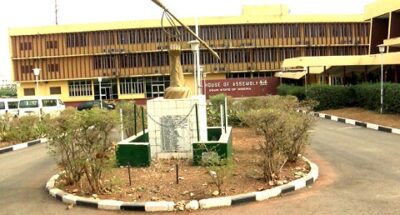 According to Vanguard, the Mace, which is the staff of authority of the state’s legislative arm, was allegedly stolen to prevent the lawmakers from achieving their aims of impeaching the embattled Speaker, Olakunle Oluomo when the House was scheduled to hold its plenary session at the Assembly complex, yesterday.

The botched sitting of the lawmakers was, however, the third consecutive time when the Assembly will be missing its sitting since the arrest of the Speaker last week Thursday.

Oluomo, who is currently standing trial at a Federal High Court in Lagos, was arrested by operatives of the Economic and Financial Crimes Commission, EFCC, over allegations bordering on corruption, forgery and financial impropriety.

This will be the second time when the Mace of the Ogun State Assembly under the leadership of Oluomo will be missing, having recorded the first one on December, 2020, but was later recovered by the Lagos Police Command at Abule Ado Area in Lagos State.

As at 2p.m, yesterday, when Vanguard visited the Assembly complex, security operatives were still demanding that journalists obtain clearance from the Head of the Assembly’s media, who refused to pick his calls.

Source closed to the Assembly, who pleaded anonymity, told newsmen that the Mace had disappeared from the complex to prevent the lawmakers, particularly the Assembly’s Deputy Speaker, Mr Akeem Balogun, who is statutorily saddled with the responsibility of conducting the business of the Assembly from presiding over the business of the day, which included the Speaker’s impeachment.

The sources added that 16 lawmakers have already appended their signatures consenting to impeaching the embattled Speaker.

But in an attempt to prevent the exercise from holding, some lawmakers said to be loyal to Oluomo allegedly conspired and moved the Mace away.