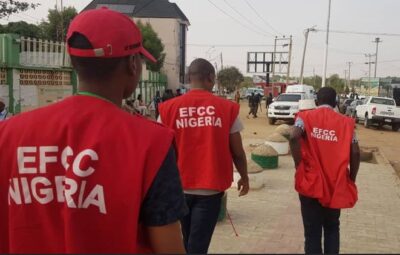 EFCC in a statement said Peter was rescued after he reached them on its official Twitter handle, on July 1, reporting how some internet fraudster kidnapped him and intended to use him for rituals.

He was asked to send his location and the anti-graft agency immediately mobilized a team of detectives to the area and they found him locked up in a room. They rescued him and arrested some suspects.

During interrogation, Peter said he was threatened by Jamilu Smith, leader of the gang.

He further stated that Smith threatened him that if he was not able to cash out (defraud) within two weeks, he would be sacrificed.

Under interrogation, David said Smith was their leader and recruited them to join him in scouting for potential online dating victims for fraud. All other suspects pointed at Smith as their leader.