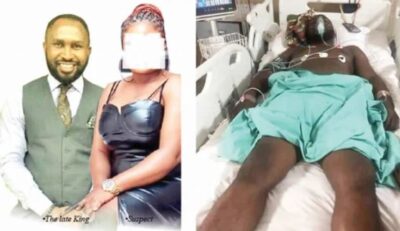 Family Suspects Foul Play As Akwa Ibom Man Dies After Meal With Lover: According to a report by The PUNCH, the family of a master of ceremonies in Akwa Ibom, Edwin King, is in grief following his demise after a meal he allegedly took in his girlfriend’s Eket home in April 2022.

It was gathered that the late King was told by his girlfriend, one Splendour Ita, to visit her in her home on Sunday, April 10, 2022, in Eket, where the duo was said to have had a meal together.

It was learnt that King died days later from kidney complications reportedly from food poisoning.

A family member of the deceased who spoke on condition of anonymity told our correspondent that King and Ita were no longer dating when the incident happened.

The family member said, “The two of them were no longer dating when the matter occurred; they broke up months before the incident. Splendour called him for them to get back together and he obliged. On getting to her home in Eket that Sunday afternoon, they both went to eat and that was how the problem started.

“I don’t know if it was both of them who ate the food but what I know is that it was my brother who died. Splendour is still alive, and that is what I don’t understand. We received a call from one of Splendour’s neighbours who told us that our brother was admitted to a private hospital because of food poisoning.

“We went to the hospital and took King away to Ibom Specialist Hospital, Uyo, where he was diagnosed with an enlarged kidney. I have the medical report with me.

“He died a few days after and Splendour has been on the run since then. They (police) said they arrested her, but I have not seen her with my eyes. Even her family members have been hiding her. They must tell me what happened to Edwin King. They cannot sweep this under the carpet.’’

Our correspondent contacted the Ibom Specialist Hospital to get a report of what their investigation was and a staff member, who did not give his name, directed our correspondent to a Facebook page, belonging to an individual to get the signed medical report from the hospital.

The report dated May 18, 2022 and signed by the Medical Officer, Dr Queeneth Akpan, titled, “RE: Edwin Eno King/M/ISH413804” stated that King was brought unconscious on April 11.

“The above patient was rushed to the emergency unit of our facility as a referral from a peripheral hospital on April 11, 2022, with a complaint of loss of consciousness and 30 hours in which the informants were parents and siblings.

“He was said to have been found unconscious alongside a female friend at her house in Eket. The door was forcefully opened to rescue them. Relatives were then called from Uyo and informed about the situation.

“At presentation, he was unconscious (GCS=5/15), power = 0/5 in all limbs, tone = normal globally. He was also noted to have right calf swelling, bruises on the left posterior chest wall and a reduction in urine volume with the passage of scanty coke-coloured urine.

“He was immediately seen by the nephrologist and neurologist and the following assessments were made: acute kidney injury, possible rhabdomyolysis, complicated by uraemic encephalopathy and right calf compartment syndrome,” part of the report read.

Another family member of the late King, who gave her name only as Idara, when contacted by our correspondent, accused the police of trying to sweep the case under the carpet.

“The police are trying to cover the case. They are not carrying us along. They want to keep us in the dark. Our mother has become a shadow of herself. This is wickedness. If you see Edwin on the hospital bed, you will think he was jammed by a tanker. The pictures are everywhere. Splendour set him up and beat him to a pulp. She should tell us what happened to Edwin,” she lamented.

The PUNCH correspondent contacted Splendour on Facebook on June 18, 2022 but got no response.

Another message was sent to her on Wednesday (June 22), it was delivered but there was no response. She responded when contacted on her mobile, saying she would get back to our correspondent after ending the call. When our correspondent told her that a message had earlier been sent to her Facebook page, she replied, “I have heard you.’’

However, our correspondent contacted one of Splendour’s family members who gave his name only as Akan. She said Splendour was a victim of circumstance.

“Anyone who told you that Edwin and Splendour were not dating is lying to you. They were still dating when this matter happened. Splendour ate the meal with Edwin but she was lucky enough not to have died. Accusing Splendour of poisoning Edwin is propaganda. It is unfair on her. She had presented herself to the police. It was even the police who told her to go and take care of her health. She is also in a bad state,” Akan said.

Contacted, the state police spokesperson, CSP Odiko Ogbeche-MacDon, said the case was reported to the police and was still being investigated.

“The case was reported to the police. Information from our disposal was that Edwin King went to visit his girlfriend at her home in Eket. After some time, he said he was hungry and they both went out to get shawarma and a bottle of beer, which they ate and drank before returning to the house.

“The lady started having constipation or pains and King took her to the bathroom to see whether he could salvage the situation. After some time, he also began to show signs of stomach ache, too. Our investigation revealed that it was neighbours who later peeped and saw both of them in the bathroom and took them to the hospital in Eket.

“The clinic ran a test to see if it was food poisoning but the hospital couldn’t find anything. While they were there, the mother of the deceased then said they should take King to a specialist whereas Splendour Ita was discharged after some time.

“She, however, continued to experience swelling on her leg and other parts of her body. She couldn’t even walk when I saw her. So, after some time, the deceased family came to me and said they were suspecting that the lady may have poisoned King. We got into the matter and made enquiries and discovered that whatever happened affected both of them.

“They said they had accumulated bills and the hospital refused to release the corpse to them. As a Force, we are not in place to talk about the cause of death. I advised them to have an autopsy done. That is where we stopped. I haven’t heard from them again. I think they want to pin it on the lady. We cannot say she is the one responsible for the death until our investigation includes the autopsy report. Have they taken the autopsy report to the police? Yes, they have. The doctor said there was an enlarged liver or something. But, what caused it?

He also said the matter was still open and had been transferred to the State Criminal Investigation and Intelligence Department.

“The Deputy Commissioner of Police has taken over that case and it is being investigated at the Homicide Section of the SCIID. We are spending low resources at our disposal in ensuring that we can get to the bottom of this,” he added.

In his view, a medical doctor with the Zenith Clinic, Abuja, Dr Chuks Zenith, when presented with the medical report from Ibom Specialist Hospital, said he could not identify any case of food poisoning in the matter.

“From what you are telling me, there is no food poisoning in this matter. There is a case of trauma and swelling. I don’t know where the talk of food poisoning comes in this matter. If there is a bruise somewhere, then there must have been physical trauma and abuse. If there are bruises around the chest wall, drinking beer and eating shawarma wouldn’t have caused that.

Also, a human rights lawyer, Festus Ogun, when contacted by Saturday PUNCH said the police should thoroughly investigate the circumstances leading to King’s death and bring the culprits to book.

“I honestly believe the police have a duty to thoroughly investigate the circumstances leading to the death of the man. Suspicion without basis is not supported by law. The family should collaborate and cooperate with the police throughout the investigation processes and even beyond,” he said.

Another lawyer, Mr Hussani Hussani, advised the police to carry out an autopsy on the body to ascertain the cause of death.

Hussani stated, “The police ought to carry an autopsy on his body to determine the actual cause of death because having an enlarged kidney or liver may not prove poison to a medical certainty I think. The family may insist on further investigation by the police which may demand exhuming the body since the whole trial will have to rely on medical and scientific evidence. The police will have to take steps to re-arrest her and question her regarding the deceased.’’