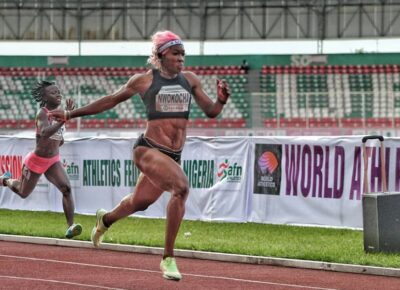 Grace Nwokocha Suspended For Doping At Commonwealth Games: Nigerian sprinter and multiple time national champion over 100 metres, Grace Nwokocha, has been suspended for the use of banned substances, the Athletics Integrity Unit (AIU) confirmed on Saturday.

The 21-year-old ran the anchor leg in Birmingham last month as Nigeria beat England and Jamaica to take gold.

“The AIU has provisionally suspended Nigerian runner, Nzubechi Grace Nwokocha, for the Presence/Use of Prohibited Substances (Ostarine and Ligandrol),” the body said in a statement

Ostarine and Ligandrol are both anabolic agents prohibited by the World Anti-Doping Agency (WADA).

A provisional suspension means an athlete is temporarily banned from competition before a final decision is taken at a hearing conducted under WADA rules.

A board official in the Athletics Federation of Nigeria (AFN) had earlier told Premium Times of the development pleading anonymity for not being authorised to speak on the matter.

“Just when we thought we were making some headway, this has really brought us back,” the official said.

The AFN is yet to make an official statement on it.

Nwokocha qualified for last year’s Tokyo Olympics and also entered the 100m and 200m at the world championships in Eugene this year, reaching the semi-finals in both events.

The development is seen as a setback for athletics in Nigeria following the federation’s efforts in anti-doping since the disastrous outing at the Olympics.

Former track and field star Blessing Okagbare was suspended after failing a drug test at the Olympics.

Where Are Those People Who Claim To Be Smart? Oya, Make Una Helep Me Answer This Question ooooo!

Guys, please I really need your help this time around, you may not have commented on this blog before; but try to do so this time around by answering the question below… “A mother beats […]

What Exactly Does It Mean To Rig An Election In Nigeria? (Find Out As You Join The Discussion)

You have heard of election rigging before, it is not only happening in African countries or Nigeria all alone. Other Nations had witnessed election rigging sometime in the past and even experiencing it now. See […]