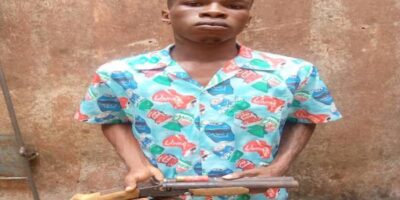 How 27-Year-Old Man Shot 11-year-old Boy Dead While Testing Gun In Delta: Kome Ogaga, a 27-year-old man has been arrested by the Nigeria Police Force.

The man was nabbed after he allegedly killed an 11-year-old boy, Hossana Merritt while testing a locally-made gun.

SaharaReporters reported on Thursday, August 25 that the Delta State Police Command had declared Ogaga wanted for the killing of the teenager.

However, the spokesman for the state police command, DSP Bright Edafe, took to his Twitter account on Tuesday to announce the arrest of the suspect.

Edafe in the tweet posted on his official Twitter handle @Brightgoldenboy, said the suspect’s relative brought him to the station after they saw a previous tweet declaring him wanted.

The tweet said the “command has arrested the suspect Kome Ogaga who shot and killed 11-year-old Hosanna in Ozoro on 22/8/2022.

Trending Now :  How Three Suspects Were Arrested For Robbing An Industrial Estate

“He was brought to the station today by a relative after he saw our tweet that went viral. Thanks to everyone who retweeted. The little boy will get justice for sure now.”

The police spokesperson earlier in his tweets said, “On Monday 22/8/2022, this suspect Kome Ogaga age (sic) 27years while testing a locally made gun, shot and killed one 11year old boy Hossanna Merritt.

“The suspect abandoned his house and ran away. Pls whoever knows his whereabouts should help so that the little boy can get justice.”