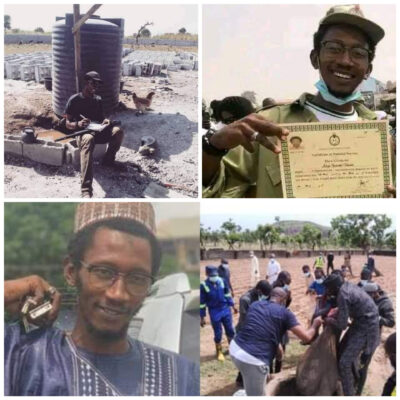 How Popular Nigerian Farmer Was Found Dead In A Well In Abuja: The body of a missing farmer, Hussaini Aliyu Takuma, has been recovered at Jeda Community in Kuje Area Council by the operatives of the Federal Capital Territory (FCT) Police Command.

Late Takuma, the Managing Director of Takuma’s Zoo Farm was declared missing by his family on June 2, 2022.

His mutilated body was recovered from a well on Saturday, June 11, by operatives of the Kuje Police Divisional Headquarters.

Umar Sambo, the Divisional Police Officer of the command who disclosed this to the News Agency of Nigeria said some suspects had been apprehended and investigation was ongoing.

The corpse of the victim was taken to the Kuje General Hospital for proper confirmation before taken for re-burial.

Mr Sambo, a chief superintendent of police, said on June 4, one 44-year old Zakari Hassan Takuma of Area 7 Garki Abuja, came to Kuje Police station and reported that on June 2, his brother Hussaini Aliyu Takuma, 32, of the same address, visited his farm at Jeda in Kuje but did not return home.

He said on receipt of the complaint, detectives tracked one 20-year old Umar Mohammed, a worker of the farm, in connivance with his friend Ibrahim Yusuf, 18, who were seen at Kabusa on their way to Kano with stolen 36 rams and six goats.

According to him, during investigation, it was discovered that the animals belonged to the victim.

Adewale Ojele, the Divisional Command Officer 1, (DCO1) said one 28-year old Ephraim Mbaiga, also a worker of the farm together with all arrested suspects connected to the matter, had been arrested.

Mr Ojele said the case file was handed over to O/C anti kidnapping, FCT Command, on directives of the Commissioner of Police.

Inspector Samuel Ochoche said one Usman Sanu, the farm security guard and his wife had absconded from the farm and were still at large.

Mr Ochoche said the body of the victim was exhumed in collaboration with the Federal Fire Service FCT, while further investigation was ongoing and would be communicated to the public.

Takuma, who graduated from a university in Malaysia, has since been buried according to Islamic rites in Abuja.

Meanwhile, friends and family members have taken to Facebook to mourn the enterprising young farmer.