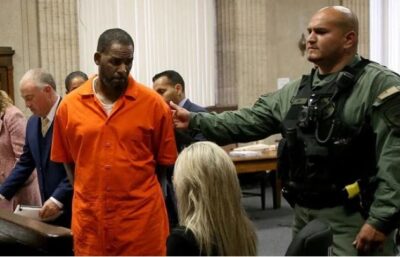 How R. Kelly Went From Iconic Singer To Convicted S*x Offender: The world-famous US singer and songwriter, R. Kelly, was finally sentenced to 30 years in federal prison for s*x charges recently.

His sentencing had come after he was convicted of racketeering and s*x trafficking in September last year.

The 55-year-old singer, born Robert Sylvester Kelly, has been in a protracted legal battle over s*xual assault and child p*rnography allegations since the 1990s.

TheCable Lifestyle examines major events that led to the conviction and eventual sentence of the award-winning musician.

August 31, 1994: This was R.Kelly’s first case of s*x with underage girls. Then 27, Kelly illegally tied the knot with 15-year-old singer Aaliyah in a secret ceremony. He was said to have obtained a fake ID for Aaliyah that showed she was 18 to avoid prosecution for statutory r*pe.

The union was eventually annulled due to Aaliyah’s age. She later died in a 2001 plane crash at the age of 22.

December 1996: Two years after his affair with Aaliyah, Kelly was in the news again for s*xual abuse allegations. Tiffany Hawkins, a woman from Chicago, had claimed that the musician had s*x with her when she was 15.

December 21, 2000: The singer was the subject of a scathing report published by the Chicago Sun-Times. The article claimed Kelly “used his position of fame and influence as a pop superstar to meet girls as young as 15 and have s*x with them.”

August 2001: Tracy Sampson, a former intern at Epic Records, sued Kelly for abusing her when she was a teenager. The lawsuit was later settled in 2002 for $250,000.

June 2002: The musician was arrested and detained in Florida for child p*rnography charges over a 27-minute s*x tape. The prosecution had during a grand jury in Chicago said the clip showed Kelly having s*x with a minor.

But the singer pleaded not guilty.

June 2008: Kelly was acquitted of the child p*rnography charges over the refusal of the girl shown in the clip to testify in the case.

2017: The embattled singer’s career suffered another major blow after the #MuteRKelly campaign took the centre stage. The campaign was aimed at denying the singer publicity and forcing organisations to sever ties with him.

During the campaign, more accusations of s*xual abuse against the singer surfaced as a woman identified as Jerhonda Pace also detailed how he assaulted her.

April 2018: Time’s Up, a group fighting against harassment, joined the #MeToo movement and demanded further investigation into allegations against Kelly.

May 10, 2018: Spotify removed Kelly’s music from its playlists amid the allegations against him.

The documentary explored claims that an entourage of supporters protected Kelly and silenced his victims for decades. After the documentary was released, more victims of the musician came out to testify.

February 22, 2019: Kelly was in the public eye again after he was charged in Chicago with 10 counts of s*xual abuse.

The ‘I Believe I Can Fly’ crooner was accused of aggravated criminal s*xual abuse involving four victims.

Three of the victims claimed they were between the ages of 13 and 16 when they were abused by the singer.

July 11, 2019: Kelly was indicted by a federal grand jury in Chicago on 13 counts, including child p*rnography, enticement of a minor, and obstruction of justice.

July 12, 2019: Kelly’s case took another major twist after the federal prosecutors in Brooklyn charged him with racketeering and other crimes. This led to his eventual conviction.

August 2, 2019: Kelly pleads not guilty to the federal charges in New York.

August 5, 2019: He was further charged with prostitution and solicitation in Minnesota. Kelly was said to have invited a teenage girl to a hotel room in 2001 and paid her $200 to dance naked with him.

March 5, 2020: The singer pleaded not guilty in Chicago to an updated federal indictment that includes child p*rnography charges and allegations pertaining to a new accuser.

September 27, 2021: After a six-week trial at the Brooklyn federal court, Kelly was convicted of s*x trafficking.

His conviction had come after he was found guilty of being the ringleader of a decades-long racketeering and s*x trafficking scheme that exploited black women and children.

June 29, 2022: Kelly was sentenced to 30 years in prison. Ann M. Donnelly, the judge, delivered the verdict at the federal court in Brooklyn, New York after hearing from several survivors who attested to how Kelly’s exploitation affected them.

WHAT NEXT FOR R. KELLY?

It remains to be seen what becomes of the singer in the coming weeks ahead of his trial in Chicago.

Kelly is separately facing trial in Chicago on child s*x images and obstruction charges. The trial is expected to begin in August.