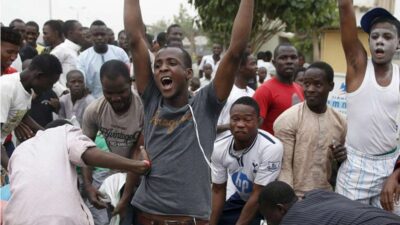 How Thousands Of Adamawa Youths Declared Support For Peter Obi And Datti Baba-Ahmed: According to Guardian Nigeria, thousands of youths have drummed support Labour Party Presidential candidate, Peter Obi and his running mate, Baba Datti-Ahmed in Yola, the capital of Yola, Adamawa State.

The report stated that shops along the popular Atiku Abubakar road were shut down yesterday as the traders came out to cheer the youth and women, who carried placards with inscriptions canvassing support of Obi’s presidential ambition.

Spokesman for the group known as Coalition of All Peter Obi’s Campaign Supporters, Jeremiah Peter, told journalists that the roadshow was to inform the people of Adamawa that only Obi has the key to save the children of the poor.

According to him, the choice of Obi is based on his competence, his credentials and age, which he said are the qualities that placed him above other contestants.

He urged Nigerians to vote candidates based on their qualities and not ethnicity, region or religion. Jeremiah pointed out that the roadshow was also to sensitise the people of Adamawa on the importance of registration for Permanent Voter Card (PVC) to enable them elect leaders of their choice.

He advised voters not to sell their votes, pointing out that their children and grandchildren would suffer the consequences of any selfish action.

Shocking: Fatal Accident In Abia State Has Claimed The Lives Of Newly Married Woman And All Other Passengers

All passengers on board, included a woman reported to be newly married, have lost their lives in a fatal accident that took place in Abia State. More photos. According a shocking report, a great tragedy […]

Christian Woman Burnt To Death In Sokoto For ‘Insulting’ Muhammad

WORDS OF WISDOM FOR THE DAY (PART-10)

Here are today’s words of wisdom for you; this is the part-10 of this program. Make sure you learn a lesson from them and endeavour to share with others. WORDS OF WISDOM FOR THE DAY “Some things are not […]