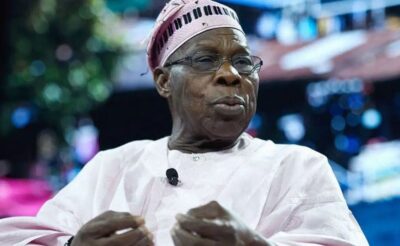 I Regret Picking Atiku As My Vice – Obasanjo

I Regret Picking Atiku As My Vice – Obasanjo: Former Nigerian President, Olusegun Obasanjo has stated that one of the mistakes he made was picking former Vice President Atiku Abubakar as his running mate during the 1999 presidential election but God saved him.

He made the revelation at the final of the National Exhibition and Awards, held at the Olusegun Obasanjo Presidential Library (OOPL), Abeokuta, Ogun State, which featured presentations and exhibitions of some products, made by students of the participating schools.

Obasanjo was responding to questions, posed by students from selected secondary schools chosen to participate at the event, organised by Students for the Advancement of Global Entrepreneurship (SAGE).

The current presidential candidate of the Peoples Democratic Party (PDP), Alhaji Atiku Abubakar, was Obasanjo’s deputy from 1999 to 2007.

They both fell out after winning their second term in 2003 and their relationship deteriorated till they left office in 2007 when Atiku contested the presidential election against Obasanjo’s anointed successor, the late President Umaru Musa Yar’Adua.

Obasanjo, who interacted with the students during the questions and answers session, went down memory lane on his life and achievements both as military Head of State and a civilian president, saying he had made many “genuine” mistakes in his life, but God made him overcome.

The former president said, “One of the mistakes I made was picking my Number Two when I wanted to become the president. But because it was a genuine mistake, God saved me.

“I will say there are many things that could have been a mistake but God saved me from them all,” Obasanjo explained.

While speaking on opportunities for the youths to take over the mantle of leadership in the country, Obasanjo said youths can never assume power, if the current trend continues.

He said with the “Not Too Young to Run” campaign, and you can see that those that are contesting now are between 70 and 80 years old, how can the youths run?” he queried.

The former president said: “Another thing inhibiting youth from running is the amount of money involved in going into politics. I hope that things should not continue like this.

“I was 39 years old when I became the military Head of State. More than 20 years after, I came back as civilian president, but those there now do not want to allow the youths. If things continue like this, I do not know how you can come in,” Obasanjo added.