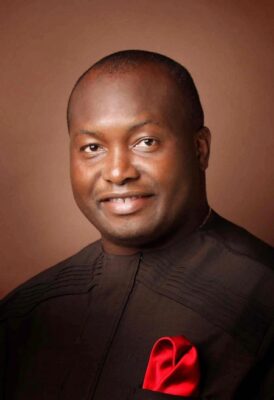 Ifeanyi Ubah Spokesperson Reveals The Only Thing That Saved Him From Being Killed In Yesterday’s Attack: Mr Kameh Ogbonna, media aide to Senator Ifeanyi Ubah has revealed how the politician escaped death after being attacked in Anambra.

Ogbonna said it was his principal’s bulletproof vehicle that saved the lawmaker’s life.

Recall that Ubah on Sunday, escaped death when gunmen, suspected to be assassins, unleashed a barrage of bullets on his convoy.

The unfortunate incident resulted in the alleged killing of his aides, including an unspecified number of police escorts in the convoy.

Reacting, Ubah’s spokesman in a statement confirmed the death of an aide, who lost his life during the incident.

He said bulletsfrom the alleged assassins hit some police operatives who engaged the gunmen during the incident that occured in Enugu State.

“If not for the bullet proof jeep the senator was riding in, he would have been dead by now.

“We were passing Enugwu Ukwu junction when they hit us from all sides and as I speak with you Obum, the special aide to the senator is dead.

“About seven security operatives were hit by the assassins bullet,” he stated.

Alex Ekubo Explains Why Everyone Must Have Money

Alex Ekubo Explains Why Everyone Must Have Money Nigerian actor, Alex Ekubo has taken to Instagram to explain the importance of having money. The actor stated that it is true that having money doesn’t necessary […]

Peter Obi Celebrates Sultan Of Sokoto On His 66th Birthday