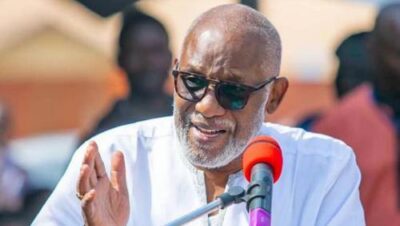 At least 40 people died in the shooting which took place at St. Francis Catholic Church.

During a virtual session with a Swiss-based Christian human rights Organisation, Christian Solidarity International (CSI) on Friday, the governor said the federal government’s conclusion was hasty.

Buttressing his point, Akeredolu said ISWAP is known to take responsibility for its attacks and always owned up to any attack perpetrated by its members.

He said, “The statement is too hasty. I take their conclusion with a pinch of salt. ISWAP don’t hide their attacks. If they have done it, they would have owned up. We are yet to know their identity and our security people are still on their trail.”

The governor said his administration would leave no stone unturned to help victims of the attack, particularly those who lost their loved ones and those on admission in the hospital.

“We are helping the victims of the attack, including those who lost their loved ones and those who are in the hospitals. We have also have people who have offered the state government some assistance. Some people have donated to the Catholic,” he said.

Akeredolu added that the incident had again justified calls for state police in the country.

According to him, the present security architecture in the country cannot provide adequate security for lives and property.

“A single police command cannot guarantee safety in this country. We must have state police now. Amotekun suffers a lot of limitation in getting all the equipment needed to fight these criminals,” he added.

About Tori News Updates & Latest Gist 2022 3128 Articles
I am the GODCHILD. A High-Intelligent Brain Design of Utmost Love and Crazy Ideas . CLICK HERE TO SEE AUTHOR'S UPDATES SO FAR.