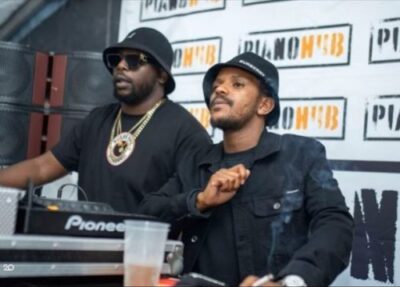 A few months ago, it was reported that the two were demanded to pay over 500k after a no-show at Zimbabwe’s Vic Falls Carnival.

The Scorpion King’s refusal to cooperate with the management of the carnival will have them locked up in prison till they do the bidding of the court.

“Kabza and Phori who performed in Zim on Sunday are to be held in prison until they are served with a summons for non-appearance at Victoria Falls Carnival, and refusal to refund,” the report states.

On Monday morning, an insider revealed that the DJs have been banned from leaving Zimbabwe as the Sheriff in charge is on vacation.

A warrant of arrest has been issued for Kabza de Small & DJ Maphorisa by the High Court of Zimbabwe; Bulawayo.

Kabza & DJ Maphorisa were paid to perform at Vic Falls Carnival a couple of months back. They failed to honour this invitation & later refused to refund the organisers pic.twitter.com/11PniuDL9U

About @TrendsOfLegndsTeam 19604 Articles
We inspire people with whatever we are destined to do in life. We're on twitter: @MusicParrot1 & on Facebook: @TrendsoflegendsBlog