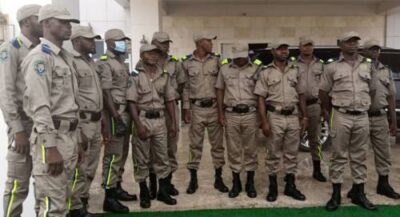 The commander, who is said to be the alleged mastermind of the killing of 14 wedding guests on Sunday, has gone into hiding as a Biafra group declared him wanted, SaharaReporters reports.

Reliably sources told SaharaReporters on Wednesday, that an “autopilot” group of gunmen led by Simon Ekpa, had raised a squad to get him at all cost to pay for the gruesome killing of the innocent youths, and several other atrocious killings the government had used him to commit in and around Imo State.

SaharaReporters had reported that 14 youths of Otulu community who were returning from traditional marriage ceremony from a neighbouring community – Awo-amma in Oru West Local Government Area of Imo State were killed by operatives of Ebube-Agu Security outfit led by Ogwu Mozambique, State Commander of the outfit.

Governor Hope Uzodimma has since absolved the outfit of the killings, saying that the Nigerian secret police, the Department of State Services (DSS) carried out the killings.

The DSS has also in damage control efforts, claimed that the victims were killed during a shootout with the criminals in their camp.

Meanwhile, unverified report claimed that Ogwu Mozambique was on revenge killing using the Ebubeagu outfit as he allegedly vowed to bury his brother killed by unknown gunmen about three weeks ago with the heads of 100 youths from the area.

The report attached a picture he took with Governor Hope Uzodimma, alleging that the he was a local drugs peddler before he quit and joined the state government which appointed him commander of Ebubeagu in Oru West and East.

“I have seen this (the report). The Ogwu Mozambique has already gone underground because Simon Ekpa’s boys are looking for him now,” a top source said.